City Of Howell To Extend Water Service For Shredder Project 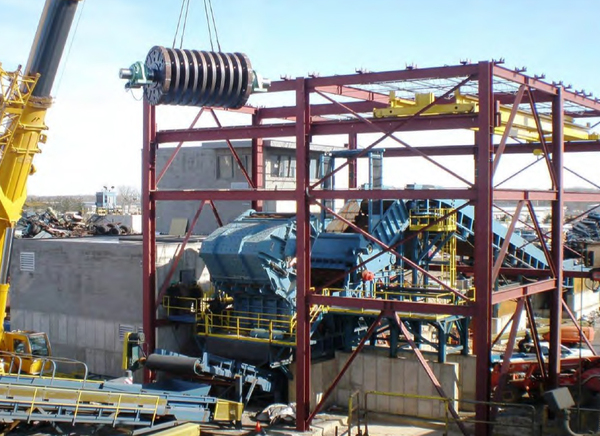 
The City of Howell will be extending water service lines to accommodate a controversial industrial shredder project.

Padnos Iron & Metal on Lucy Road already has needed state and local approvals to construct an industrial car shredder but still needs to connect to a public water supply for operations. The Howell City Council approved an agreement in September for the MHOG Water Authority to allow Padnos to connect to that water system as the property was said to be well within 200 feet of the MHOG system and the City currently has no water main along Lucy Road for the connection of the Padnos property. However, the Padnos request to connect to MHOG was denied roughly a week later by that organization’s board.

During Monday night’s Council meeting, it was stated that there is more than ample capacity in the system to accommodate anticipated water usage. Mayor Bob Ellis told WHMI Padnos owns the property and has a legal business that’s zoned for industrial uses and they have a right to get water. He said it would have been easier for them to obtain it from MHOG since they have pipes that are fairly close but that board voted down the request. The City will have to extend service lines but it was stated during the meeting that there is ample capacity in the system.

Ellis said a memo of understanding that was reached basically states Padnos understands the City will provide water if they can’t get it from elsewhere but that Padnos will release the City from any legal liability if there’s a delay in providing it. He noted they can’t run their equipment without water and if it takes the City a while to provide it, then Padnos might have a cause of action against the City and the City could be liable for damages. Ellis says the memo helps protect the City and allows them more flexibility in the timing of putting in the lines.

Ellis noted that Padnos is meeting all City ordinances and zoning requirements so as far as the City is concerned, they don’t have any reason to oppose it. He said the City has an ordinance that prevents drilling for water and Padnos has a right to access water - saying the City has a public utility that provides water and if MHOG doesn’t want to do it, then the City will.

The memo of understanding is being called into question by Howell Attorney Don Parker, who represents the group Protect Livingston, which has been vocally opposed to the project. He issued a press release, which is posted below, stating the City failed to provide transparency during the October 25th Council meeting and disclose that it had already finalized a deal to provide water to the site two weeks prior.

Parker commented that then-Howell Mayor Nick Proctor openly fought against assertions made that the City was seeking to provide up to 18,000 gallons of water per day to the industrial shredder. He stated the City failed to meet a basic level of transparency that night when they did not explain that the agreement was already signed. Parker said “It is past time for Howell to pull back the curtain on the shredder and start answering questions, including how many taxpayer dollars it plans to spend building a water pipeline to the shredder”.

Ellis did not directly respond to Parker’s accusations but did say that there is a group that has been putting out a lot of misinformation to try and get people upset about the business and most of what they say is not accurate.

Meanwhile, a press release from City Manager Erv Suida (also posted below) called the effort to halt the rights to use public water supplies from an existing, legal operation “extremely unfortunate”. Suida says the 18,000 gallons of water that Padnos would use “barely moves the needle as far as capacity goes” when considering the almost one million gallons of treated water per day the city currently provides to residential, commercial, and industrial facilities, which is only about a third of their maximum capacity. While never mentioning Protect Livingston by name, Suida says the assertion that somehow the water is mixed with or made dirty by the process is (quote) “just another inaccurate and misleading assertion” made by the group. His full statement is also posted below.

In response, Parker sent the following statement to WHMI: "It is unfortunate that it took my efforts and FOIA requests for the City of Howell to finally admit what I claimed at the October 25 City Council meeting, that is, that the City is going to spend millions of dollars to provide water to the shredder. Rather than throw a temper tantrum at a public meeting, why didn’t City officials just admit that what I was claiming is completely true? Furthermore, the City in an attempt to further divert and deceive has issued a press release chalked full of provably false accusations. First and foremost, the city states “[t]he former Mayor made it extremely clear that the item of discussion at the meeting had nothing to do with utilities, only the jurisdictional transfer of Lucy Road, which was an accurate statement,” when the actual resolution on the jurisdictional transfer included in the October 25, 2021 Howell City Council packet says “[w]hereas, these requested transfers will provide an equal level of road service and sanitary sewer and municipal water services…” Nothing about utilities? Why did the City of Howell enter in a Memorandum of Understanding to provide water to Padnos 13 days prior to voting on the jurisdictional transfer of Lucy Road? Why hasn’t there been any public discussion on the cost of providing water to the shredder before the City committed itself in the Memorandum of Understanding? It’s high time the City of Howell starts to treat its citizens with the same care and concern that it treats Padnos. If the City were more transparent in its dealings with respect to this matter, my FOIA’s would not be necessary. Clearly, the City had and continues to have a hidden agenda with respect to this project." The resolution Parker is referring to is also posted below.

As far as the water goes, Ellis said he doesn’t think there is any legal way the City can deny them service. Ellis asserted that Padnos will be charged for all water usage – adding it’s a public utility so the City does not make any profit but will recover all costs, meaning there will be no costs to taxpayers for providing the water service. He noted that Padnos is a business regulated by the Michigan Department of Environment, Great Lakes & Energy and a division of the MDNR looked at their usage of wetlands – saying those issues are totally out of the City’s jurisdiction and they don’t have any authority to regulate pollution.