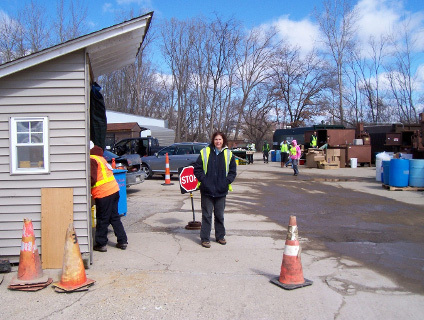 
An environmental assessment will be taking place on a piece of property owned by the City of Howell where a new building is proposed for Recycle Livingston after PCB contaminants were discovered on a neighboring property.

Recycle Livingston leases the property at 170 Catrell Drive from the City, which purchase the property in 1991 from Erb Lumber. At that time, soil samples revealed PCB’s exceeding the 1.0 limit in various locations but documents showed remediation of those areas was conducted and the site was deemed clean prior to the purchase. PCB’s are described as a group of manmade chemicals.

Recycle Livingston is looking to construct a new building on the property. There was a recent sale of property to the west and an environmental assessment revealed amounts of PCB’s above limits in various concrete surface on the property, which was reported to the EPA and there was proper removal and disposal of the contaminated concrete. However, the EPA is now requiring the City to perform grid sampling before any construction of a new facility for Recycle Livingston.

The City reached out to the firm that conducted the assessment on the neighboring parcel and received what was said to be a competitive bid. City Council met Monday night and approved a proposal for $7,880 from Innovative Environmental Solutions, which includes soil borings, sampling, testing, and a report of findings.

Cty Manager Erv Suida told WHMI PCB’s were discovered in the thin top layer of concrete and samples led them to believe it may have mitigated toward the City property so they’re going to have tested to make sure there aren’t any. If there are and they need to dispose of the concrete, he said they’ll be working with the firm to determine that. Suida noted there are not high concentrations of PCB’s and while they do exceed limits, they are not so high where it would require significant remediation and removal. He said they’re working with the same environmental company for the sampling and testing since they’re already ahead of the game.

Meanwhile, Recycle Livingston and the City were earlier awarded $282,504 in grant funds for a new facility at the current location. The City will not spend any money on the project; the City is simply administering the grant funds for the project and will act as the fiduciary.

The estimated turnaround time on the report from the environmental assessment firm is expected to be two or three weeks.

More information is included in the Council packet. A link is provided.