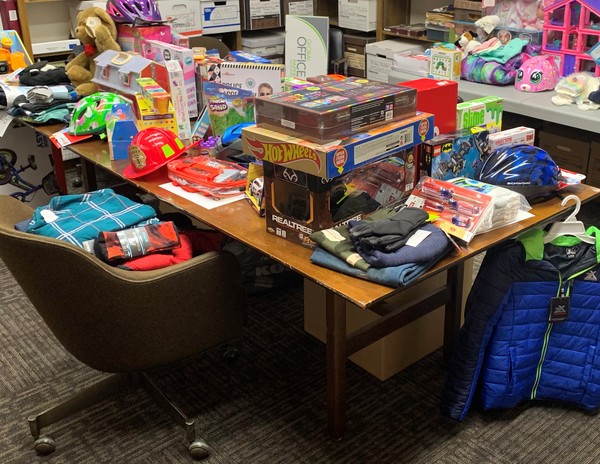 An inaugural fundraiser coordinated by City of Howell employees this holiday season far exceeded expectations and will ensure a large local family has a very Merry Christmas.

Employees have been participating in a fundraiser for about three months, which was made into a challenge between departments. Interim City Manager Erv Suida says the heart of it was a can/bottle drive, which Suida and some select employees had the honor of returning on their lunch hour. In all, he says they returned about 10,000 cans and raised $2,676 from the can drive, plus some cash donations. The police department won both fundraiser challenges - those being the most funds raised overall and the most funds raised per team member. In addition, boxes of food totaling 543 pounds was donated to Gleaners Community Food Bank.

Suida says they’re really excited and couldn’t be happier with all of their employees and what they did because that’s what the season is all about – it’s about giving – and everyone really came together to make it all happen. He says the police department beat everyone else pretty bad by every measure – noting their contribution was probably 60% of the total contribution so everyone did a really good job and they couldn’t be prouder. The funds raised will be used to support a local family of eleven, through the Salvation Army of Livingston County’s Adopt-A-Family program. Suida tells WHMI what was pretty impressive was they were able to get everything on the list and then some, as they were able to learn some other specific needs and took care of those too. This Saturday morning, a group will be loading up vehicles with all the gifts collected for the City’s adopted family though the Salvation Army of Livingston County. The family will be receiving all of the gifts as well as $800 in gift cards and a laptop computer. (JM)