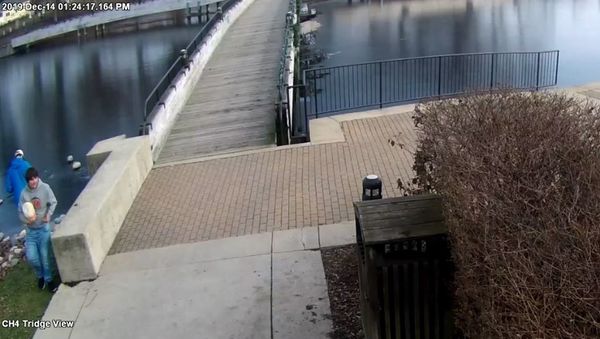 The City of Brighton is working to identify some teenagers it says are responsible for vandalism at the Mill Pond.

A group of teens were caught on camera throwing rocks from a retaining wall onto the ice and into the pond, prompting a Friday post on the City of Brighton Facebook page that says the community takes a lot of pride in its downtown - particularly in the Mill Pond Area. It says City staff and volunteers have invested time and money to improve the area by working to address erosion with the placement of rocks and the planting of native plant species. The post goes on to say it is incredibly frustrating to see the work so blatantly disregarded and asks that anyone who recognizes any of the individuals to contact the Brighton Police Department. The post states perhaps the young men didn’t realize their choices could lead to a charge of misdemeanor malicious destruction of property and it appears to have happened in broad daylight. The post concludes by saying when anyone sees such disrespectful treatment of public spaces, do not hesitate to contact Brighton Police or call 911.

The post has since generated hundreds of comments, with many criticizing the city for publicly posting pictures of minors and smearing the teens on social media for tossing rocks onto ice while threatening criminal charges. Many seemed to agree the teens were just playing around with the rocks and likely didn’t realize the purpose, with one commenter stating they should use it as a teaching moment, not a shaming one. The city has since removed the post, with Manager Nate Geinzer telling WHMI they plan to review their social media policies going forward. (JM/JK)