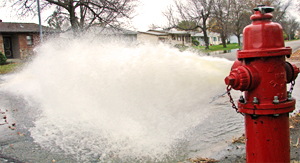 
Spring has sprung and the City of Brighton hydrant flushing program is getting underway.

The City says the arrival of spring also brings one major water distribution maintenance program - hydrant flushing. It’s performed twice a year, once in the spring and once in the fall. The City says active flushing is important to the water system and an industry-standard which most water departments perform in one fashion or another.

The purpose is to flush out minerals, such as calcium and iron, that may have settled in the pipes during low flow events.

Operators begin the process in the middle of the night to avoid traffic on Grand River and other high volume traffic areas, then methodically work their way into residential areas.

Officials advise that any residents who notice an operator standing by a hydrant with water spraying from the pumper nozzle should not be concerned as they are only performing preventative maintenance to the water distribution system. The City asks that people be considerate for the safety of these crews and avoid driving through the water if possible.