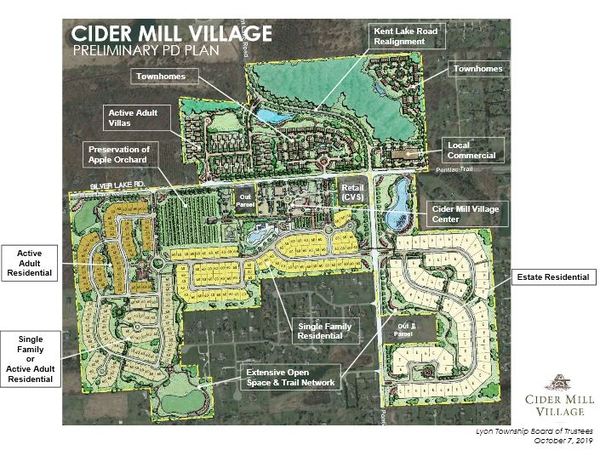 Density continues to be the deal breaker when it comes to a proposed project moving forward on the Erwin’s Orchard property in Lyon Township.

The board met Monday night and voted unanimously to deny preliminary site plan approval for the Cider Mill Village project. It would include a village center and commercial options, and different housing options. The mixed-use development would include various types of housing with different amenities such as a village center and trails and pathways. Some commercial aspects such as a restaurant are also proposed. The plan was technically up for preliminary review but Developer Howard Fingeroot requested the board approve the preliminary plans based on community benefit or approve the proposed density. Density is the main concern that has repeatedly been raised by the township board and planning commission.

Plans had called for 579 dwelling units on the 264-acre property, which would average 2.3 units per acre. At last night’s meeting, developers presented new plans that reduced the density by 89 units, eliminated an apartment rental component and office building and increased parking for the village center. Among the benefits touted by Fingeroot was the relocation and realignment of Kent Lake Road and 12-acres of the apple orchard operation being preserved but managed by Blake Farms Apple Orchard based out of Armada. It was also noted existing environmental issues would be cleaned up, which involves arsenic remediation, and a contribution would be made toward the purchase of a ladder truck for the fire department. Fingeroot told the board he really tried to take the township master plan and ordinances and find something that was a win-win for everyone. He commented they’ve been working on this for two years now and have been through multiple meetings and changes – saying they tried to make something creative that would be good for the township that people are looking for. He told the board they knew the Erwin’s were retiring and cider mill could close so a big goal was to preserve that. He said the other goal was to address traffic issues along Silver Lake Road, Pontiac Trail and Kent Lake Road as the intersections are failing.

In the denial, township officials voiced a myriad of concerns related to density foremost but also site plan deficiencies, lack of compatibility with the township land use master plan, traffic and parking on site. There were also additional concerns raised about storm water issues and it was noted that a minimum of three pump stations would need to be modified to accommodate additional flows. The planning commission earlier recommended denial based on the current plans, along with the township engineer and planner.

Supervisor John Dolan commented he was really disappointed with the process, as developers have been through two conceptual reviews and the main comment was density. Dolan said he couldn’t get behind the density because it’s so far over the top and developers just aren’t listening – further questioning why they didn’t just come back for another conceptual review for an open exchange instead of the vote. He said the board is trying to plan and do the right thing for the township, noting they always end up sitting with developers who try to tell the township what it needs based on research. Dolan said it’s not an easy decision as this project would completely change the township as they know it. He said if it works that would be fantastic but if not, the developers move on and then the township is stuck with the bad roads, overcrowded schools and everything else. Dolan said further, every board that developers have been before have asked that they drop the density.

The meeting was well attended and residents in the audience were permitted to speak prior to the vote and a handful expressed the same concerns about density and traffic, with one stating they didn’t think it was consistent with the bigger picture and what people are looking for. Another raised questions about the viability of the apple orchard and if the 12 designated acres would be sustainable for the business. Trustee member Lise Blades recused herself from the discussion and vote as her property is in the vicinity, which constitutes a personal and financial conflict of interest.

Although the board voted to deny the request, the developer still has the option to revise plans further and then resubmit. (JM)