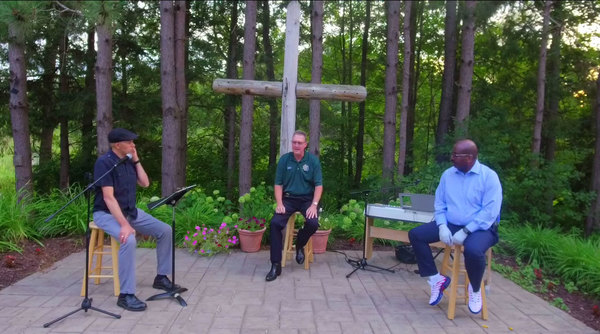 
Livingston County’s sheriff and a Detroit pastor held a conversation about law & order, race and faith on Wednesday evening.

Chilson Hills Church in Howell held a special fireside service in its memorial garden featuring Livingston County Sheriff Mike Murphy (middle) and the Reverend Christian Adams of Hartford Memorial Baptist Church in Detroit (right). The event was live-streamed but also had people attend in-person that could ask questions. The gathering was conversational and offered a message of faith and building trust.

Sheriff Murphy talked about a lack of positive interaction between police and the community, a destabilized society, resistance against structures put in place to maintain order, fracturing of family and a turning away of traditional values with God at the center. Murphy said there needs to be laws but also can’t simply legislate our way out of problems related to society. He talked about police reform, the loss of funding and the loss of positive relationships between communities and law enforcement. Murphy said when you take cops out of the community, including beat cops of the past, you lose that interaction and then the community and law enforcement grow further apart. He said cops often are dehumanized and viewed as the bad guys. Murphy said cops are people too and could be experiencing issues at home – adding the job is also an emotional roller coaster.

The Reverend Adams talked about a need to address systemic issues, saying it’s all about strengthening and building relationships while embracing and accepting accountability. He said there’s “no way to win with sin” referencing prejudice and inequality – adding it’s easy for people to just accept it as the way it is or not their problem, issue or concern. Also featured was music from Sherri Jackson-Caldwell and Alex Pickens, who serves as a chaplain to first responders in the Lansing area. He talked about what compelled him to become a minister to first responders. Pickens also shared a story about racial profiling when he was 16-years-old and got boxed in a parking space by a Grosse Pointe police officer because he “fit a description”.

People in the audience commented about the loss of resource officers in schools, police shootings, financial and demographic disparities between communities, unemployment, education, and not being able to compliment women without it being viewed as sexist.

You can hear a portion of the conversation this Sunday morning at 8:30 on WHMI’s Viewpoint. The full event can be viewed on the Chilson Hills Church Facebook page. That link is provided.