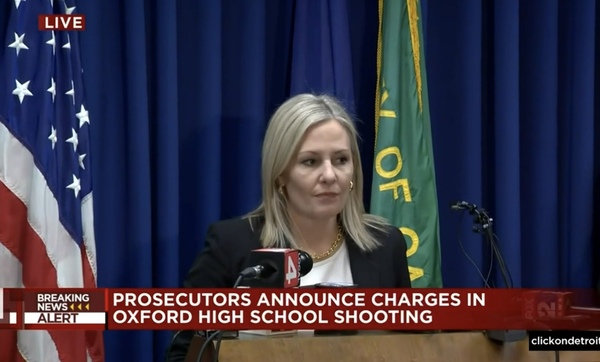 OXFORD TOWNSHIP, Mich. (AP) — A 15-year-old boy was charged Wednesday with murder, terrorism and other counts for a shooting that killed four fellow students and injured others at Oxford High School.

Charges against Ethan Crumbley were announced Wednesday, a few hours after authorities reported the death of a fourth teen from the school in northern Oakland County. Crumbley is charged as an adult with one count of terrorism causing death, four counts of first-degree murder and seven counts assault with intent to murder.

Prosecutor Karen McDonald did not reveal a possible motive for the shooting Tuesday at Oxford High School. However, she said prosecutors are “confident” they can show the crime was premeditated.

Deputies rushed to the school around lunch time and arrested the suspect in a hallway within minutes. He put his hands in the air as deputies approached, Oakland County Sheriff Michael Bouchard said late Tuesday at a news conference.

Bouchard said Myre died in a patrol car as a deputy tried to get him to an emergency room.