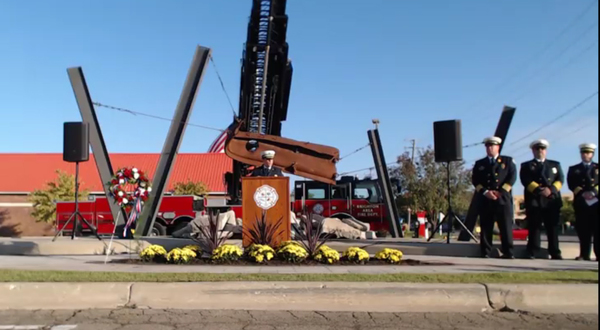 First responders gathered this morning to honor the memory of lost lives and sacrifices made during the Brighton Area Fire Authority’s annual 9-11 Tribute to Our Fallen Heroes, with the ceremony streamed online because of the coronavirus pandemic.

A cycle of four bells was rung out in remembrance of their comrades who passed away during, and from, the effects caused by the September 11th attacks. Brighton Fire Chief Mike O’Brian became emotional as he spoke about the ongoing toll the attacks took that day and in the days since. "But I truly hope that today we remember those who are still suffering; the mental illness, the sickness, the families who wake up every day missing someone who lost their life in these cowardly attacks. And I would say it's impossible not to see it, not to feel it on a day like today. September 11th was just as pretty and blue-skied as it is right now. But on September 12th, America came together. It was impossible to not feel that as a country we came together." O'Brian then urged citizens to try and recapture that sense of unity.

Following the presentation, leaders of the first responder community in Livingston County laid a wreath at the station’s 9-11 Memorial.