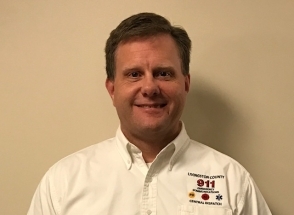 
The director of Livingston County’s 911 Central Dispatch is leaving for greener pastures.

Chad Chewning tells WHMI that his last day on the job as the Director for Livingston County 911 Central Dispatch will be January 2nd, after which he will become the director of sales for Xybix 911 Furniture Company out of Colorado. That firm manufactures workstations and other equipment for dispatch centers across the country.

Chewning leaves the county’s 911 department after more than four years at the helm, although he has amassed over 34 years in the field. He began his dispatch career at Paramed/AMR Ambulance in 1985, advancing through the ranks to become the Communications Manager from 1988 until 2002. Chewning then went to the Oakland County Sheriff’s Office where he served as the Fire Dispatch Quality Assurance Supervisor and second in command. In 2014, he came to Livingston County as the Deputy Director of 911 Central Dispatch until he was promoted into his current role as Director in early 2017.

Among other duties with Livingston County, Chewning also serves as an Executive Board member of the State Mutual Aid Box Alarm System (MABAS), Vice-President of the Michigan Communications Director’s Association (MCDA), and has been placed on the committee for inclusive and positive change in the fire service in Michigan by the Michigan Fire Marshall’s Office. He previously served as Vice-President for the Michigan Chapter of the National Emergency Number Association (NENA). He is also a certified and vetted Communication’s Unit Leader (COM-L) in Michigan, during which he was named the APCO 2016 Director of the year for the State of Michigan.

In announcing his departure, Chewning said that he has “finished what I was hired to do, which was help fix the dispatch center which the staff is considered to the best in the state by achieving the Tri-Ace Accreditation.”

He added that during his time in Livingston County he had “worked with a lot of incredible people in the public safety partners of the county, and most of all with a great staff of 911 operators that do the work to make the center what it is today.”

The vacancy has been posted and Livingston County Administrator Nathan Burd says they are still receiving resumes, adding that they are in the process of reviewing them and hope to schedule interviews over the next few weeks with the goal of filling the vacancy as soon as possible.