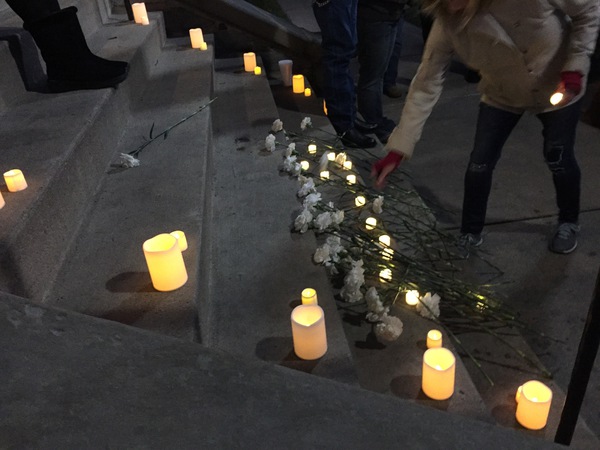 A Candlelight Vigil Commemoration in downtown Howell paid tribute to individuals who have lost their lives to addiction, while also reminding those affected by it that there is a supportive community ready to embrace them in Livingston County.

Over 50 people attended Wednesday’s vigil at the Historic Howell Courthouse to remember loved ones they’ve lost, and to recognize those struggling with addiction and individuals who are in recovery. More than 65 names of victims who have lost their lives to the epidemic were read aloud while attendees placed white flowers and candles on the steps of the courthouse in their memory.

One individual to join in the ceremony was the young son of Dennis Brewer, who is one of the candidates running for the 44th Circuit Court judgeship in next month’s election. Brewer says he brought his son to the event because he believes the conversation with young people about addiction needs to begin early. Brewer says educating children by talking about the issue with them at a young age is critical to making them aware of the dangers of drug abuse.

Cheryl Towery attended the vigil with some of her family members to honor the memory of her daughter, Elaina Towery, who passed away last year after overdosing on heroin. Towery says she wants to be a voice for other parents who have experienced the same type of loss because when it happened to her, she felt she had no one that understood. Towery tells WHMI she is meant to raise awareness about the stigma attached to addiction because of its unbiased nature. Towery reminds addiction affects all different types of people including her daughter, who was a cheerleader and volleyball player. However Towery notes that when her daughter gave up her parental rights to her son, it fueled her addiction, bringing attention to its ability to cross any and all barriers in terms of demographics and socioeconomic status. Towery says especially here in Livingston County, where so many lives have been lost to addiction, there is a need for a wake-up call. That’s why she started the nonprofit, Heaven’s Hope, as a way to say, “there are people out there that truly care and want to help.”

Francine Zysk, one of the event’s organizers, says not enough focus has been placed on those who have lost their lives to addiction as it highlights the very real consequences of the epidemic. In addition to remembrance, the vigil served as a place of comradery. Zysk says, “We are here for each other. Too many times people lose a loved one and feel like they’re all alone.” Zysk wants individuals affected by addiction, whether directly or indirectly, to know there is a supportive community in Livingston County that welcomes them with open arms.

Various efforts in Livingston County have taken aim at addressing the addiction and opioid epidemic, including the creation of nonprofits, the establishment of a county committee and action toward developing additional recovery homes. (DK)