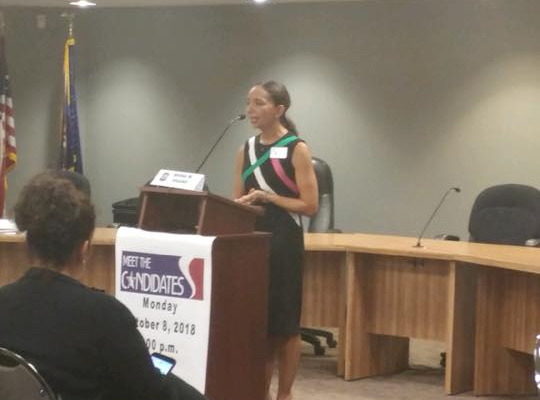 A forum in Hamburg Township gave candidates in local contested races a chance to answer constituents’ questions, which varied from typical issues like roads and healthcare, up to and including a local embattled judge.

The Pinckney/Putnam/Hamburg/Hell Chamber of Commerce in anticipation of the November General Election held its “Meet the Candidates” forum at the Hamburg Township offices Monday. The event was moderated by Chamber President Rick Beaudin, who made a point to note the chamber was proud to have invited candidates from all parties for contested races at the local, state and federal level.

Unfortunately, for many of the contested races, only one candidate showed up. That included the race for a newly created 44th Circuit Court seat in Livingston County, with Suzanne Geddis and Dennis Brewer running for the seat, although only Geddis attended. Citing prior commitments, a statement was read on Brewer’s behalf, explaining his platform. While the questions for Geddis naturally veered toward topics related to the courts, like the opioid crisis and how it relates to the county’s Drug Treatment Court, Geddis was also asked what should be done about 53rd District Court Judge Theresa Brennan, who is in the midst of a misconduct hearing by the Michigan Judicial Tenure Commission. Geddis said the Brennan case was one she tried repeatedly to correct. "I've offered two different chief judges in this county to remove her from her docket and assign it to me in addition to my own docket. I offered SCAO, which is the State Court Administrators Office, to remove her from her docket and assign it in addition to my docket. I also offered to be appointed chief judge so I could remove her cases. That too was denied. As a sitting judge I took every action I could to address the Brennan situation."

Also speaking last night was Democrat Adam Dreher who is running for the 22nd State Senate seat against Republican Lana Theis, who was not present. Her husband Sam read a letter in her place, expressing her honor in having served as a state representative and hopes to move on to the state Senate. One of the audience-provided questions Dreher was asked about concerned the state of the "damn roads in Michigan," to which he said that local municipalities are getting the short end of the funding stick from Lansing. "One of the hardest problems with our roads is that there is not enough revenue sharing coming from the state to the local communities that are tasked with the maintenance with the majority of the roads. So the state does a lot of the M-roads and provides the federal funding for the interstates and what not. But it's this revenue sharing that's constantly been decreasing to counties and townships that has caused us to see the roads we travel every days just get worse and worse and worse. So I would propose fixing the revenue sharing and allowing local communities to fix their damn roads." Also speaking was Green Party candidate Eric Borregard, who discussed the failure of the two major parties to serve the best interests of citizens because of their dependence on corporate money.

Also featured was the race for the 42nd State House district. Republican candidate Ann Bollin was not present and had her brother read a statement talking about her track record as Brighton Township’s clerk. She is facing Democrat Mona Shand, who was in attendance. Shand, a former public school teacher and journalist, spoke about the partisan divide she has encountered while campaigning. "I've talked to thousands of people across this district and all of them say they are tired of the fighting. They're tired of it being 'us versus them' and I really do believe now at my core, more now than ever, that we have more in common than apart. We have to focus on those shared values, those things we have in common. I believe everyone in this room believes every child should have access to a quality education. I think everyone in this room believes everyone in Michigan should have clean water coming out of their taps and in their lakes and their rivers. So I think we need to come back to those things we have in common."

In the race for the 8th Congressional District, Republican Incumbent Mike Bishop is being challenged by Democrat Elisa Slotkin. Bishop was not present Monday, but had Sheriff Mike Murphy read a statement in his place, discussing his work on the House Ways and Means Committee to help bring economic benefit to Michigan. Slotkin talked to the audience about her initial reluctance to get into the race because she was wary of partisan politics. She said that changed when Bishop voted with fellow Republicans last year to eliminate the Affordable Care Act. Slotkin says she underestimated the prevalence of corporate money in politics and quickly realized that has to change. "I made the decision back in January that I was not going to take corporate PAC dollars. I cannot tell you how many angry phone calls I got from senior Democrats in Washington that I had that decision. And I called for the first bill of the new Congress to be of campaign finance reform. We have to demonstrate to our young people that our system is worth saving." David J. Lillis of the U.S. Taxpayers Party is also running for the 8th District and also spoke about the two-party system being broken and a lack of representation in Congress for taxpayers. (JK/DK)