Candidates Face Off In Forum For 8th District GOP Nomination 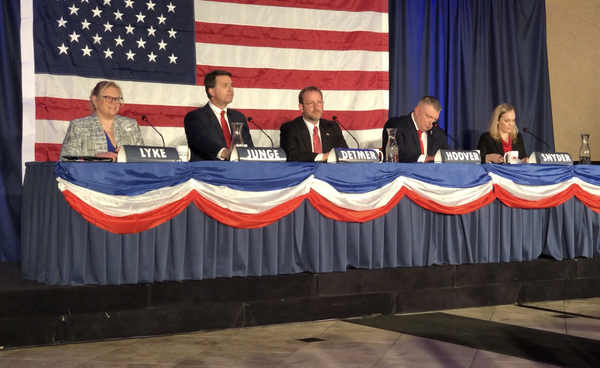 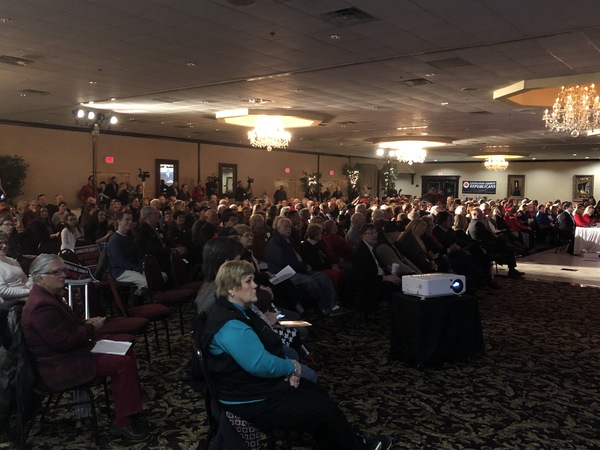 Roughly 500 people packed Crystal Gardens in Genoa Township, Thursday, to hear the candidates’ views on several state and national issues. The forum was put on and moderated by the Livingston County Republican Party, along with Protect our Republic. The evening began when emcee Meshawn Maddock, Chair of the 11th District Republican Party, asked the crowd to chant "Fake News!", which they did twice. She then said it was "fake news" that Michigan was "not of fire for our President Donald Trump." She then pointed out the media table in back and said she hoped, "they report this is a packed room, over 500 seats" and that "this shows you that Livingston County, Oakland County and the entire state of Michigan is on fire and ready to put some good Congress people in these seats..."

One of those running for the nomination is East Lansing Attorney Kristina Lyke. A life-long resident of the district and graduate of Pinckney High School, opened up saying she is a high-energy, self-made person, who is running to support President Donald Trump. She spoke of the importance of the 2nd Amendment, keeping the economic engine running, and fighting for veterans, police, fire, and first responders.

Also running is former Fox 47 News anchor Paul Junge, who also served at the U.S. Citizenship and Immigration Service. Junge said it was important to make Slotkin a one-term member of Congress. He said as he’s campaigned in Livingston, Ingham, and Oakland counties, the anger and disgust at the representation voters are receiving in Washington D.C. is very strong. Junge said Slotkin told voters she was not about impeachment, and then went to Washington and instigated it, and voted to remove Trump. He said the 8th District deserves better.

Howell’s Mike Detmer is running and said that we are at war for the heart, soul, and traditions of the state and country. He said he is at the point of his life where he refuses to bow down to leftists and socialists, and that he right now we are seeing a lot of divisiveness, name calling and deadlock. Detmer sees people trying to destroy what our men and women in uniform have fought for, and that he will go to D.C. to not just stop those people, but defeat them.

Alan Hoover is a 20 year veteran of the Marine Corps, and preached conservative and Christian values. He sees the Democrats as trying to put voters into a position of silence by using tactics to make conservatives feel like they are closet racists or seek to do harm to the planet. Hoover said they throw acronyms out like LGBTQ, and say babies don’t have souls, but he has acronyms, too, like USMC, and believes in life at conception.

Michigan Board of Education member Nikki Snyder said she is running to represent the people of the 8th District, and that it is time for new leadership and bold ideas. A nurse of 18 years, Snyder said she was fired up and will stand strong as a Christian conservative and as one of the most passionate pro-life conservatives.

Candidates were asked about the Medicare for All proposal being touted by some of the Democratic Presidential candidates. Lyke said it’s ridiculous and would cost us trillions. Junge said that would be a disaster and pointed out that Medicare does not compensate hospitals and medical centers. Detmer called Medicare for All not just a disaster, but absolutely ignorant. He said health care is in his wheelhouse and needs to be taken out of the hands of the federal government. Snyder said she would fiercely oppose it and that choice and competition is the real solution. She said there’s a difference when the government is telling you how to spend your dollars and what you should be doing with them.

On the topic of national defense, moderators asked about the Department of Defense establishing a 6th branch (the U.S. Space Force), and what country do the candidates think is the biggest threat to our national security. Detmer wants to maintain America’s status as the top military force, and sees China, Iran and Russia as the biggest threats. Hoover said a space force would protect our communications like cell phones from going down to attacks, and cited Iran, Russia, China, and North Korea as threats. Snyder said China, Russia, the Middle East, and communism are our greatest threats and our military must remain strong. Lyke cited Russia and China as threats; Russia for going back to Cold War techniques, China for going after our IPs. Junge stressed the importance of re-electing Trump, saying a Democrat being in charge of our military would be a disaster.

They were asked about the many Democrats, including Slotkin, who criticized Trump for the killing of Iranian General Quassem Soleimani, believing his death would lead to greater repercussions. Hoover said that Slotkin was trying to take away Trump’s war powers and that she is clearly working against him. Snyder said that whatever it takes to wipe terrorism off the earth, we should do, and that she would not try to take power from Trump like Slotkin is. Lyke called the Democrats nuts and said that taking the war powers away from the president is unconstitutional, and suggested that Slotkin needs to go to law school someday. Junge said that Slotkin was in the CIA and had a chance to get Soleimani, she said “the juice was not worth the squeeze.” Detmer said Trump’s been under attack by the Democrats since day one, and that they are trying to hog tie him in protecting the country.

All were in support of the 2nd Amendment and against a federal firearm registry. When asked if candidates would support “red flag” laws for gun owners in Congress, they were again united in their opinions. Junge said they violate the 2nd Amendment and due process. Detmer said if a red flag proposal found its way to his office, it would go in the shredder. Hoover asked that once the government can go into your house and tell you you can’t own a gun because of what he called, "gossip," how long until it trickles down to voting? Snyder proposed bringing gun education back into schools so that people wouldn’t feel so uncomfortable around them. She said kids need to know what to do around them. Lyke said she is completely against them, and that there are many liberal judges who will take away a gun based off hearsay.

Moderators asked candidates what their best attributes were for running against Slotkin, who’s campaign spent $7-million on the 2018 election and has $2.8 million in cash on hand for this election cycle. Detmer said his character is to stand up to anybody. He called Slotkin’s 3 tours of duty deceiving, and that she needs to be called out on stolen valor. Hoover said he wants to draw as much money out of the Democrats here to help Republicans elsewhere win; and they’ll need every penny to beat him. Snyder said she wasn’t surprised to hear how much money was spent in 2018, and that Republicans do a better, more efficient job. Lyke said she was a fighter, litigator, and small business owner. Living here her whole life, she said Slotkin came in like Mary Poppins, and doesn’t know the values of the people who live here. Junge said he’s been designated as a Young Gun by the National Republican Congressional Committee. He claimed to be the only candidate that will have the financial resources to answer her attacks. 2019 year-end filings by the Federal Election Commission indicated Junge raised $273,418, far outpacing any of the other four. But Detmer later took issue with that, saying whoever won the nomination would get the party’s full financial support. Hoover said he’s recently been recognized by Combat Vets for Congress and will have their support.

Candidates were asked their stance on abortion, and again, there was unanimity in opposition. All expressed pro-life sentiments. Hoover said life begins at conception, and that just because a baby hasn’t taken a breath, it should still be protected. Snyder said she ended up leaving a job once for being bullied for not participating in an abortion. She said she would refuse public funding to medical facilities that do not allow labor delivery nurses to refuse to participate in those procedures. Lyke agreed that life begins at conception, would pass a bill making abortion illegal, and provide more funding and options for adoption. Junge pointed to Virginia where doctors can have conversations with mothers on the topic after birth as what can happen when Democrats take control. He said he would support life, and not fund Planned Parenthood. Detmer said he was Christian and absolutely pro-life.

Finally, the candidates were asked their top 3 priorities should they be elected. Lyke said to keep the Constitution, lower taxes and keep the economy thriving, and work on better mental health care. Junge said he wants to secure the borders, focus on continued economic success, and work on health care issues. Detmer said he wants to protect the gains made during the current administration, focus on improved health care, and protect both the borders and 2nd Amendment. Hoover wants to continue Trump’s agenda, put Americans before illegals, and keep our military strong. Snyder said she wants to protect the Constitution, support business and the economy, and focus on health care, with particular respects to pro-life measures, support for vets, and no Medicare for All.

In anticipation of Thursday's forum, Matt Hennessey, Slotkin's campaign manager, released a memo earlier in the day saying she, "enters this race knowing it will be a tough fight, in a district drawn to keep the seat Republican and with outside groups already pouring millions of dollars into attack ads against her. But she begins the campaign season with a strong relationship with 8th District voters built on legislative accomplishment and principled leadership." Examples of that listed by Hennessey were House-approved legislation Slotkin helped author with "unanimous, bipartisan support" to lower prescription drug costs.

Voters will select the Republican nominee on August 4th. (MK/JK)