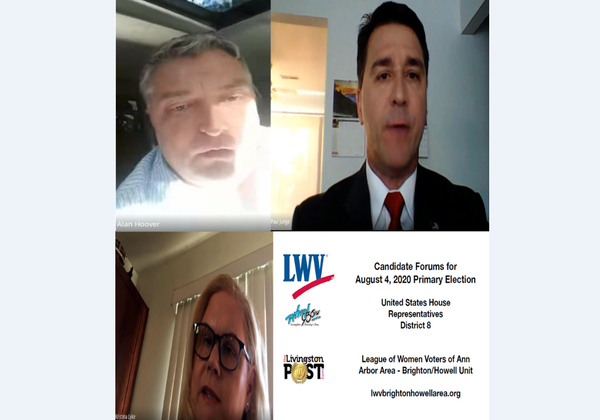 The candidates gave thoughts on several topics including the state and nation’s response to the coronavirus pandemic. Hoover was firm in his belief that shutting down was not the way to go. Junge called the pandemic a “wake-up call” for us with China. Lyke agreed that China was deceptive, and stressed over the length of the forum a need to stop manufacturing drugs there, and bring that business home to the United States and to Michigan. Lyke also took issue with the way nursing homes are being handled, saying that it was completely wrong what Governor Whitmer did, allowing COVID-19 patients into them. Lyke called it “basically attempted murder” or “gross negligence.”

Hoover, when asked what Congress could have differently to help businesses during the outbreak, said the federal CARES Act was too bogged down with things that didn’t belong in there, and too much money went to big businesses, not small ones.

Junge was asked if he’d support raising the federal minimum wage, and said he was skeptical of doing that. He said when you force wages above the market level, it pushes people out of jobs. Junge said it’s often the most vulnerable people that are pushed out, too.

When asked about foreign interference in American elections, Lyke didn’t believe in mailing out ballots, as she said it can create fraud. Hoover, too, was against mail-in voting, and equated it to setting up a democratic process in another country. He said our military doesn’t set up an election in a foreign country and then mail ballots. He said it was a civic duty for Americans to go to the polling place to vote.

Voters will decide at the August 4th primary which candidate will go on to face Slotkin in the November general election.

To see a video of the full campaign forum, visit the WHMI News Facebook page.