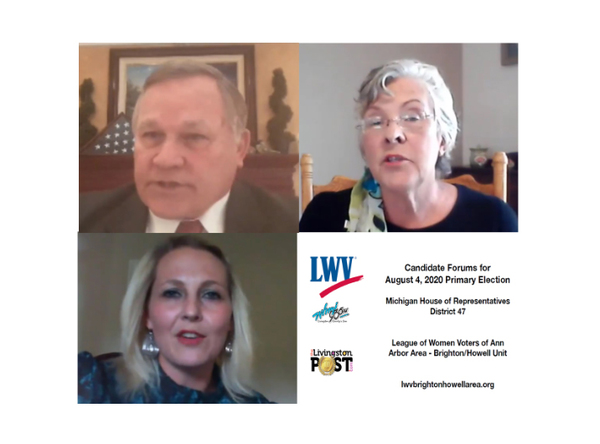 
Three of the Republicans vying to be the nominee for 47th State House participated in a campaign forum.

The seat is currently held by Republican Hank Vaupel, who is term limited.

Bezotte, when asked about the shutdowns, said he thought the governor did the right thing for the initial 30 days, but beyond that, both houses voted not to extend it, yet it was anyway and the economy suffered. When asked about armed protests that took place recently at the state Capitol building, Black said she was encouraged that people came out and expressed how they felt. Reckling defended citizen’s rights to assemble and protest.

Candidates were asked what they would do about deteriorating infrastructure, to which Reckling saw an opportunity to learn from what they didn’t do in the past. She said they need to prioritize funding for roads and bridges. While the state may be facing a $3.2-billion deficit in the coming year, when faced a $2-billion deficit during the Great Recesssion, money wasn’t put towards roads, and Reckling said we’re paying for it now.

The candidates were also asked share their thoughts on the need for better internet in rural parts of the county. Bezotte said there have been efforts in the past, but that they didn’t come to be doesn’t mean they should stop trying. He said in recent years they talked to numerous companies about bringing high speed internet in, but the coast was always too prohibitive. He said it’s unacceptable that they haven’t accomplished it, and that we have to come together to get it fixed.

When asked about PFAS contamination and control in the environment, Black hit a stumbling block when she admitted to not knowing what it was. With regards to what strategies she would use to support better education in schools, she said more control needs to come back to the local level. Black said the single biggest issue in the country is the federal government intervening in public schools.

Voters will decide the Republican nominee as part of the August 4th primary. The winner will go on to face Democrat Adam Smiddy in the November general election.

A video of the forum can be viewed in its entirety on the WHMI News Facebook page.