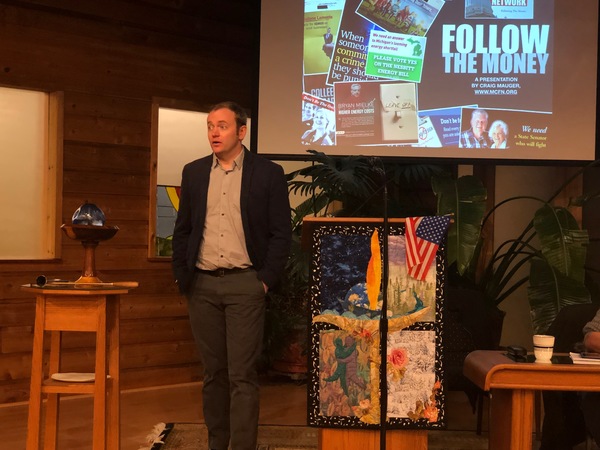 Campaign finance transparency and donation disclosure were two of the main topics presented to area Democrats by the leader of the Michigan Campaign Finance Network. Craig Mauger is executive director of the non-profit, non-partisan Network and spoke to Livingston County Democrats as part of their regular meeting, Thursday night.

Mauger shared a few arching points in his presentation. One is that the cost of campaigns is going up. Second is that the money invested in elections is less transparent. And third is that how the story of money in politics is becoming more of a key part on how government works. With limits on how much individuals can give, political action committees have a grown as a way to disguise where the money is truly coming from. And as long as an advertisement or mailing doesn’t tell a voter who to expressly vote for, “Dark Money” ads which talk about how terrible a candidate is don’t need to disclose where they got their money. Mauger said this happens through all levels of politics, from the local level to the state level to the federal level.

Michigan is currently rated 50th in transparency for 2 reasons, Mauger said. One was that lawmakers aren’t required to make personal finance disclosures, and the other is that the governor’s office and legislature are wholly exempt from the Freedom of Information Act. The State Supreme Court is also a hot topic, with Mauger saying Michigan has the most expensive Supreme Court races and the least transparency. However, Mauger believes there is reason to be optimistic for change. He said that before leaving office, former Governor Rick Snyder vetoed a couple bills that would support non-disclosure, whereas previously he had supported and signed them. He also called upon residents to become more engaged and go a step further than merely saying something needs to be done. Mauger said that Michigan’s citizens need to raise their level of awareness and call upon their legislatures and people of influence, telling them that this is something that needs to be fixed.

Anyone wishing to see who is donating where on the federal level, Mauger says, should visit OpenSecrets.org. Those wanting to view the donors to any state office holder can find that information on the Michigan Campaign Finance Network’s website, mcfn.org. (MK)