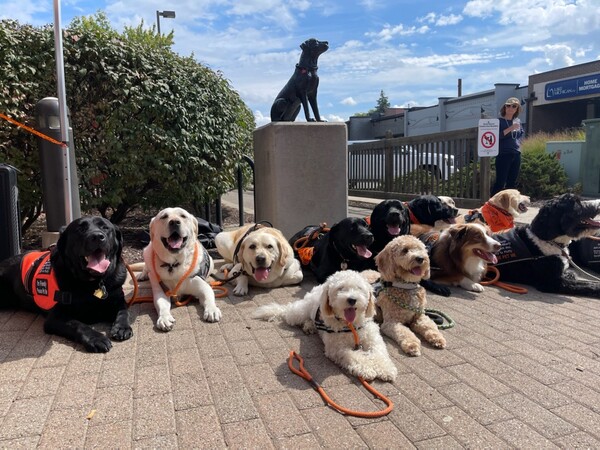 A huge crowd was on hand last weekend at the Imagination Station playground in Brighton for the dedication of a sculpture in honor of the Brighton Area Schools Pack of Dogs. In particular, the statue is dedicated to Caesar, the original therapy dog in Brighton, who has since passed away of old age. Brighton now has a dozen dogs, who are referred to as “social-emotional-learning” dogs because they perform multiple functions.

Karen Storey, who founded the Pack of Dogs program, tells WHMI she was overwhelmed by the response from the public to the group’s invitation to attend the ceremony. The playground is located next to the Mill Pond in downtown Brighton. Story said, “It was the best day” of her life.

Among the speakers was Alexis Hobson, a 10th grader at Oxford High School. After the shootings, Oxford school officials requested that Brighton send its therapy dogs to comfort the students. Hobson said when she returned to school on Jan. 8th, she had apprehensions about coming back, but was “immediately greeted by one of the wonderful Brighton therapy dogs,” adding she would “never forget him.”

Hobson said, again in her words, "I was able to be in the moment with the dog and not worry about anything else.” Hobson thanked the Brighton community “on behalf of the Oxford High School students. Through good days and bad, thick and thin, we know there are therapy dogs right around the corner, and it all started with the Brighton Pack of Dogs.”

Four Oxford students were shot and killed and seven others, including a teacher, were injured when 15-year-old student Ethan Crumbley opened fire at Oxford High School with an AR-15-style rifle. Crumbley remains in the Oakland County Jail without bond.

Dacia Beasley, the new principal at Oxford High School, was the principal of Oxford Middle School when the tragedy occurred. She told those assembled Saturday that she had "never seen anything so transformational" for her school or in her career as the impression made by the therapy dogs from Brighton and the effect they had on students. Beasley said that she knew from that point on that Oxford would have to have its own therapy dog program.

Beasley said that as a result of the Brighton dogs, Oxford now has seven of its own therapy dogs, facilitated by donations from Oxford families as well as from the Brighton community. Beasley described Storey as a “mentor” who has taught her and the Oxford school staff a lot about caring about other communities and their well-being. At one point she asked Storey how they could return the favor, and said Storey simply told her to pass it on, since another school district may need their help some day.