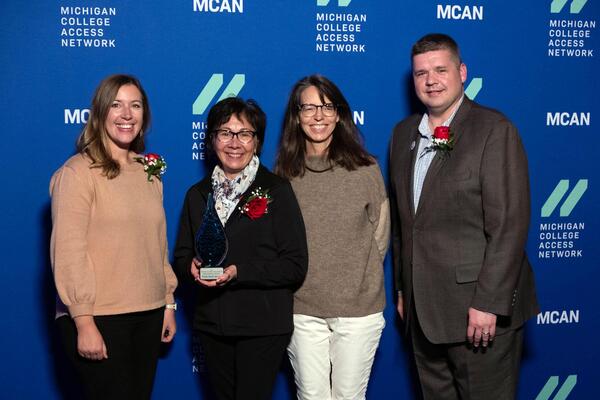 The Marina Award recognizes a school that has achieved basic change by engaging everyone involved in the process of creating a desire upon the students to pursue a post-high school education. In announcing the award, MCAN officials said, “The Bridge Alternative High School’s staff team has embraced systemic change and demonstrated exemplary work as an alternative school committed to college access.” An announcement of the award was made at the MCAN awards dinner on Nov. 9th in Lansing.

The Bridge was established to fill a vacuum in the Brighton Area Schools, where a classroom approach was needed which embraced students who failed to thrive in a traditional classroom setting and needed a non-traditional teaching approach to help them succeed. As a result, The Bridge was established in 2010 on the campus of the Brighton Education and Community Center - the BECC building — at Church and East Main streets.

According to Principal Colleen Deaven, the success of The Bridge comes down to the caring staff. She says, “They go above and beyond every day to ensure every student has what they need to succeed.” Deaven says the greatest reward comes when she sees students “who didn’t believe they could do it” walk across the stage at graduation ceremonies.

Deaven doesn’t believe in the cookie cutter, one-size-fits-all approach to education - espousing, rather, an individualized approach. She says The Bridge has the “rare opportunity” to do exactly that for its students because it’s so small, with just 76 students — the data coming from this fall’s student count.