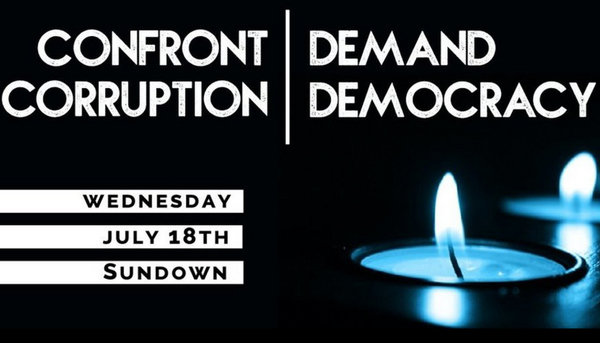 In the continuing fallout over President Trump’s meeting with Russian President Vladimir Putin, a coalition of political activists are planning a series of candlelight vigils across the country, including in Livingston County.

The “Confront Corruption and Demand Democracy” vigils will begin at sundown, including at the Brighton office of U.S. Congressman Mike Bishop. The Rochester Hills Republican represents the 8th District and issued a statement on Monday saying that while, “Open diplomatic communication between nuclear superpowers is essential for the safety and security of the world…Vladimir Putin’s Russia is not a trusted friend of the United States,” and that, “We must hold Russia accountable.”

Despite that, the coalition, made up of more than 30 groups including People for the American Way, Move On, Common Cause and Public Citizen, says, “the corruption of the American government by the President, his associates and many in his party has reached a new, profound low.” Trump is facing bipartisan criticism for his refusal to publicly challenge Putin over Russia's election hacking and for doubting U.S. intelligence agency conclusions about Russian meddling in the 2016 campaign. Trump backers, including House Speaker Paul Ryan, Senate Foreign Relations Chairman Bob Corker, and former House Speaker Newt Gingrich have criticized his performance.

The group organizing Wednesday’s vigil says that those who choose to attend are “committing to participate non-violently and in accordance with the law.” It will be held from 8 to 11pm in front of Congressman Bishop's Brighton Office on East Grand River. You’ll find details through the link below. (JK)