Rosebushes To Honor "Rosie The Riveter" At Brighton Memorial 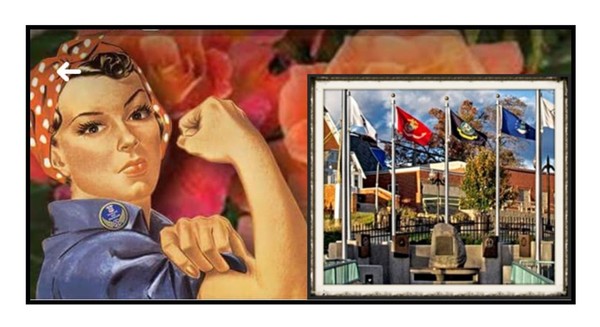 The Brighton Women’s Garden Club and the Brighton Veterans Memorial Committee will honor the women of the Greatest Generation by adding rosebushes to the Veterans’ Memorial at Mill Pond Park this week.

The rosebushes will honor “Rosie the Riveter”, which is a nickname for the millions of female workers who stepped in to fill critical jobs left behind when men were called to fight in World War II. A dedication ceremony for the two new rosebushes, each honoring an individual World War II “Rosie,” will take place at 10am this Wednesday, August 14th.

The rosebushes are provided by the Willow Run Chapter of the American Rosie the Riveter Association (ARRA) as part of an initiative to plant over 80 Rosie the Riveter rosebushes in Michigan this season. ARRA was founded in 1998 by the WWII “Rosies” themselves for the purpose of providing fellowship and preserving their stories and legacy. The ARRA has over 6,000 members nationwide, with over 500 members in Michigan, many of whom are living WWII “Rosies.” The roses are of a new variety called the “Rosie the Riveter Floribunda Rose” developed by Weeks Roses to honor the female home front workers of WWII.

Jane Wilson, President of the Brighton Women’s Garden Club, says the rosebushes will allow the “Rosies” of WWII to symbolically take their place in support of servicemen and women, just as they did in the war. (JK)