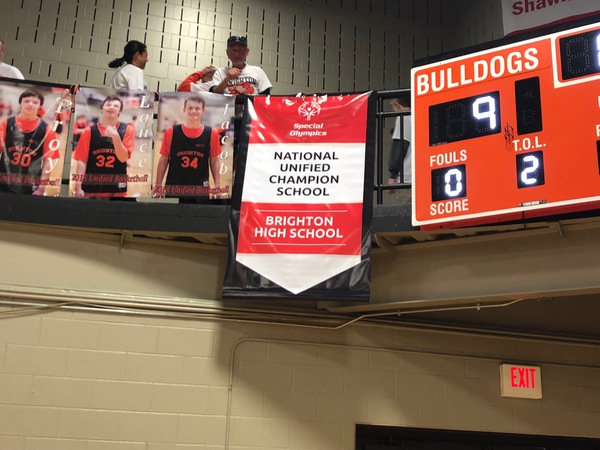 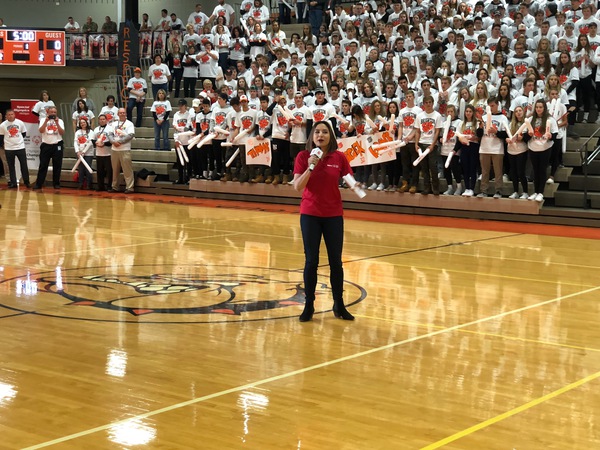 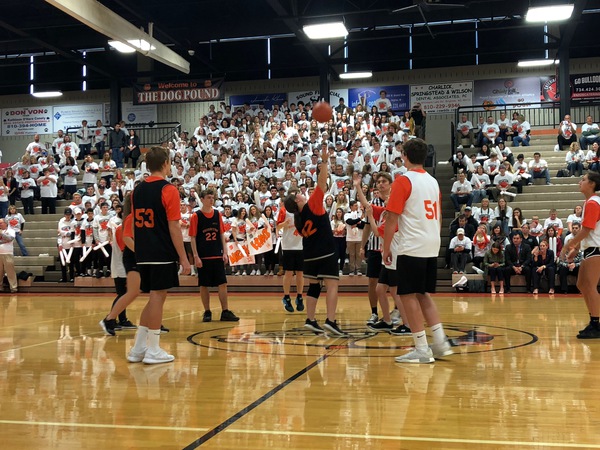 The Brighton High School Unified Team has received a rare and prestigious award for their inclusionary efforts towards special needs students.

A celebratory pep rally was capped off earlier this morning with the hanging of a banner from the ESPN Special Olympics Unified Champion Schools National Recognition Program. The Brighton Unified teams play three sports: flag football, basketball, and bocce ball, with regular and special education students playing on the same squads.

ESPN’s Michelle Steele was on hand to speak to the student body and present the banner that now hangs in the field house. While there are 6,000 Unified Champion schools in the country, Steele spoke to the exemplary nature of Brighton’s program. There are 6,000 are Unified Champion Schools in the country. Of those 6,000, only 221 have been recognized as banner school. Steele said, “The cool thing about Brighton is that they are in the top 5. They’re firing on all cylinders here and it’s absolutely energizing to be in a place where they have embraced this program, and embraced this movement.It just feels like a very inclusive high school, whether you’re in the field house, or in the pool, or the weight room, or in the hallway.”

Before the assembly, a breakfast was held and several students, Unified Team members, and alumni spoke of what the program meant to them. Coach and teacher Jodie Renicker helped start the program 3 years ago. She said it’s had a profound effect on everyone who’s participated. Renicker said the program has helped change the school’s culture, and that you only have to come to one event and see it in action to become a believer.

Unified coach Andy Doupe said the program has really blown up in popularity and that it is a testament to the school body and administration, both of which have backed the program up 100%.

BHS Junior Chase Hildon participates in the program. He said being on the team has helped him learn a lot and get through a lot in his life. He encouraged others to get involved, saying he won’t forget the feeling of helping others feeling belonged and that they won’t forget it, either.

During the assembly, Unified Team members ran a class-based competition and then played a 10 minute basketball scrimmage before the raucous student body crowd. Following that, Michigan Special Olympics President and CEO Tim Heilman spoke to the BHS student body and called the program a model for what schools in the world should look like.

Following the banner unveiling, Congressman Mike Bishop presented the team with a congressional tribute certificate from the United States House of Representatives.

Brighton High School is the first and only school in Michigan to receive this honor. The other four schools chosen as a national Unified Champion are located in California, New Jersey, North Carolina and Virginia.(MK)