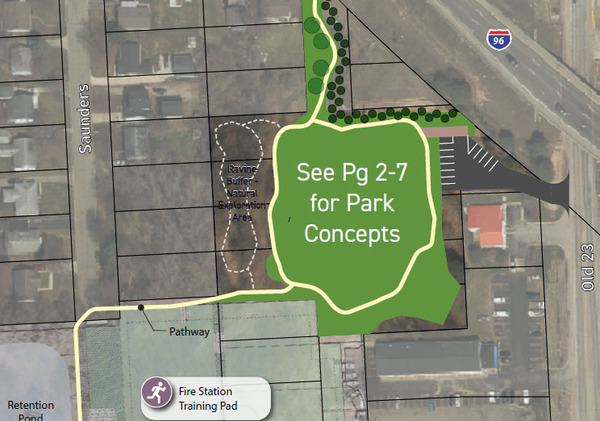 
Brighton Township officials met to discuss options and amenities for a new park.

The Board of Trustees and Planning Commission met in a joint session, last week, to discuss concepts for a Weber Street Park. The township has 2 acres behind the EMS building off of Old US-23, just north of Weber Street. During the meeting they shared thoughts and ideas about 3 park concepts. One was for a playscape focused park, one was for a dog park, and the third was a hybrid of the two.

Brighton Township Manager Brian Vick said that a Master Plan survey revealed a desire for such a space by residents. He said that from 1,500 responses, a new park was very high on the list.

In that third, hybrid option, a corner of the park was conceptually cut off to provide a gated area for dogs. Other features could include a natural exploration area that acts also as a buffer to neighbors, a themed playscape, a couple basketball half courts, and three shelters with picnic tables. Officials were interested in an inclusive playscape, with Supervisor Patrick Michel suggesting they might find a grant to help with the costs. As for the basketball courts, it was felt that half courts would be preferred, as full courts tend to draw people from far away. With the shelters, one shelter would be larger in order to fit multiple families, while a couple other smaller shelters would be more suitable for a single family. There was interest in using natural mounds in the area as a play space for children. Several shade trees, an outhouse, and a bike rack would fill out the remaining space, along with interconnected walkways.

The township appears settled on making Weber Street Park a park for the township residents and not necessarily a destination park. Vick said they are fortunate to have Kensington and Island Lake nearby, and so they aren’t looking to draw people in from around the county. A park, he says, is one thing the township is missing, is something the residents want, and that this is a prime location for it.

Multiple parking options were discussed, with officials not wanting to create a nuisance for homeowners with street space near the park. One option is to build out a parking space with access to Old US-23. Another option is to use township parking space at the nearby fire station, although patrons who park there would need to take a pathway around Brighton Area Fire Authority property to get to the park.

The township’s consultant will take the ideas from the joint meeting and come up with a revised concept and estimated price for the Board and Planning Commissions consideration at a future meeting.