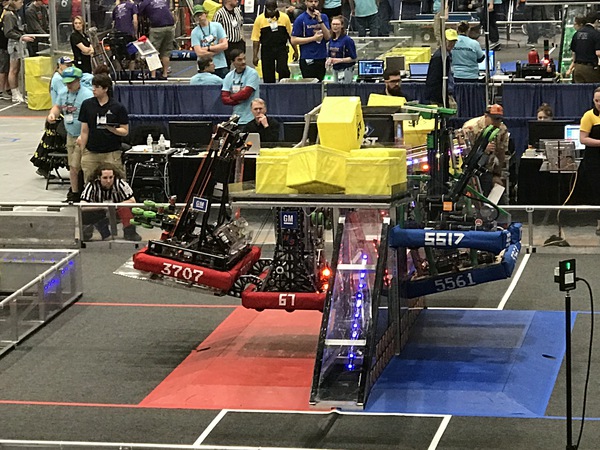 Livingston County teams acquitted themselves admirably at the 2018 FIRST World Championship this past weekend in Detroit, with the Brighton High School team making it the farthest.

In all, 700 teams competed in the international event, held at Cobo Hall and Ford Field, with the winning alliance consisting of two Michigan-based teams; StrykeForce from Kalamazoo, their second world championship in a row, and Team RUSH from Clarkston. They were joined by robotics teams from Ontario and Pennsylvania. For local teams, the Brighton TechnoDogs was on the winning alliance in their division, before falling in the semifinals. Dan Delisle is one of the two coaches of the Brighton TechnoDogs and tells WHMI that they just missed out on making it to the finals, but nonetheless finished "the fourth team in the world" competing well against teams from across the U.S., but also China, Canada and many other nations. As for other Livingston County teams, the Howell S.C.O.T.S. Bots, Charyl Stockwell Preparatory Academy GEMS and Hartland Electro Eagles all made it to the quarterfinals in their respective divisions.

FIRST, an acronym of For Inspiration and Recognition of Science and Technology, brought 15,000 students from across the world to the Motor City, which is set to host the championship for the next two years. (JK)