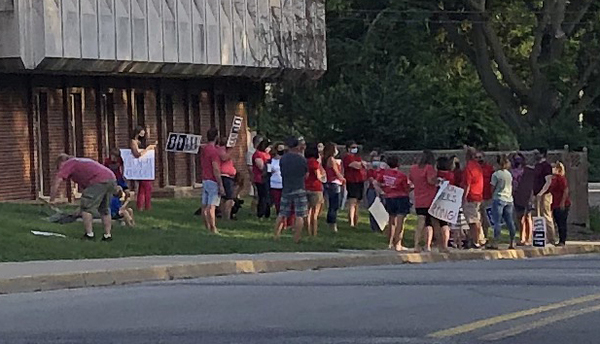 The Brighton Board of Education was greeted by a large number of protesters when members met to interview the three finalists for the superintendent’s position Monday evening.

The protesters were, by and large, teachers angry with the way the contract negotiations process is going. They are represented at the bargaining table by the 325-member Brighton Education Association. Although the teachers are in the second year of a three-year contract, the agreement has an annual salary re-opener. The protesters couldn’t enter the BECC building, where the board meeting room is located, because of the coronavirus pandemic, although they were able to watch the meeting via Zoom. Many of them carried placards with such expressions as, “What is excellence worth? Support Brighton teachers.”

The protesters were so loud outside the building, and honking their car horns, that it was hard for Zoom viewers to hear what the finalists had to say except for the last one, Swartz Creek Community Schools Superintendent Benjamin Mainka. By that time, most of the protesters had left. The other finalists for the superintendent’s position are Brandon School District Superintendent Matthew Outlaw and Sharon Irvine, Brighton Area Schools Assistant Superintendent for Labor Relations and Personnel.

Many of the teachers who commented at the online meeting complained that the school district is demanding they take a 5.8% cut in pay, all the time when the district has millions of dollars saved up in fund equity. Alexis Coffman, a Hawkins teacher with three children in the district, has been in the district for four years, having come to Brighton from the Rochester Community Schools. She said that it has taken up to the present time for her to get back to the salary level in Brighton that she was at 12 years ago in Rochester. Anna Wells, a library media specialist, said, “We are not valued as we should be.” Parents who commented also took the side of teachers. Shannon Brown, who has a daughter in 3rd grade at Spencer, said, “I think our teachers are priceless. I think they deserve a pay raise, not a pay cut.” Both teachers and parents who commented said that with the substantial fund balance and no cuts forthcoming from the state in per-pupil state aid the district has no reason to ask for pay cuts.

Becky Rapp, a special education teacher at Hawkins, told the board, “I now feel the district is taking advantage of the teachers. I spent over $500 on plexiglass for my classroom (and other items, and) this feels like a slap in the face.” She added that, “Spending money in the classroom is just something we teachers do.” Several other teachers also said they had spent hundreds of dollars of their own money getting their classrooms ready with items like plexiglass and air filters. Scranton Middle School teacher Katheryne Friske said she was furious at the requested pay cut, telling the board the teachers were merely asking for a modest, 3% cost-of-living increase. Jennifer Keillor, who has three children enrolled in the Brighton Virtual Academy, said, "Our teachers deserve better, and so do our kids.”

Following Monday’s meeting, the Board of Education issued a statement that read in part:

“Brighton Area Schools has not been immune from the economic havoc wrought by the COVID- 19 pandemic. Approximately $1.5 million was retroactively cut from the BAS 2019-2020 fiscal year budget and the state is projecting in excess of $5 million in cuts in Brighton Area Schools’ budget for the 2020-2021 school year. Despite knowledge of the looming financial crisis, the Board proactively sought in the spring of 2020 to protect all of its employees from reductions to their current pay while asking them to suspend expectations for additional money in the 2020- 2021 school year. In short, the Board wanted to bring financial stability during a time of great uncertainty. The Board successfully finalized contracts under those terms with two employee bargaining groups – the administrators and support staff. However, Brighton Education Association teachers’ union leadership declined to engage in negotiations.

As August approached, the district administration and Board were focused on the adoption and implementation of its Return to School Plan – a Herculean effort on many levels that interim Superintendent Dr. Laura Surrey was tasked with overseeing. The administration and BEA leaders met frequently during the summer to formulize details of the plan, which includes added teaching staff to reduce class sizes where possible, necessary personal protective equipment, and a new online curriculum to help make an online option for students easier for teachers to deliver. However, the BEA leadership did not engage in any financial negotiations until last week. This is a negotiation process that should have been done months ago, but is now just beginning – diverting the limited time and resources of our administration during this critical period that should be focused solely on preparing for the safe return to school.

To handle the complexity of a negotiation over finances, working conditions, and safety protocols with an in-person return to school, the BEA leadership insisted on a traditional negotiation process. The success of this traditional bargaining process relies heavily on the confidentiality of the ongoing negotiations, and the Board has at all times in the past fully respected the sanctity of such confidentiality.

The Board held a special meeting on August 31, 2020, for the sole purpose of interviewing the three finalists for the Superintendent position – one of the most important decisions a school district makes. The approval of a teachers’ contract was never an item on the meeting agenda. However, during a lengthy call to the public at the conclusion of the interviews, many teachers and parents expressed outrage over what they believed to be the Board’s positions on various issues being discussed in the ongoing “confidential” negotiations. Much to the dismay of the Board, not only was it highly inappropriate for the BEA leadership to selectively disclose information from the negotiation session out of context, many of the issues to which the teachers and parents objected were based on false information.

It is unfortunate that the BEA bargaining team waited until the eleventh hour to begin bargaining financial terms and chosen to manipulate the emotions of the teachers and community as means of trying to pressure the Board into capitulation. Although the Board would prefer to publicly disclose all facts and discussions that have occurred during the negotiations, the Board is legally prevented from doing so and such disclosure would be counter-productive to the negotiation process to which the Board remains committed.”

The complete statement is posted below.

Monday’s meeting was one of four scheduled this week to interview the finalists. The others are scheduled for today, Wednesday and Thursday. The virtual meetings will include stakeholders, with one candidate to be interviewed each day. Today, Sharon Irvine will be interviewed; Wednesday, it will be Ben Mainka and Thursday, Matt Outlaw. Staff members’ questions will be addressed from 4-5 p.m., administrators’ queries from 5:15 to 6:15 p.m. and those posed by community members from 6:30-7:30 p.m.

Questions should be submitted in advance to John Silveri of the Michigan Leadership Institute at jsilverimli@gmail.com. Those with questions will be asked to state their name and whether they are a staff member, student, parent, or community member.

After participating questioners will be asked to share their thoughts at www.surveymonkey.com/r/9CZR965.