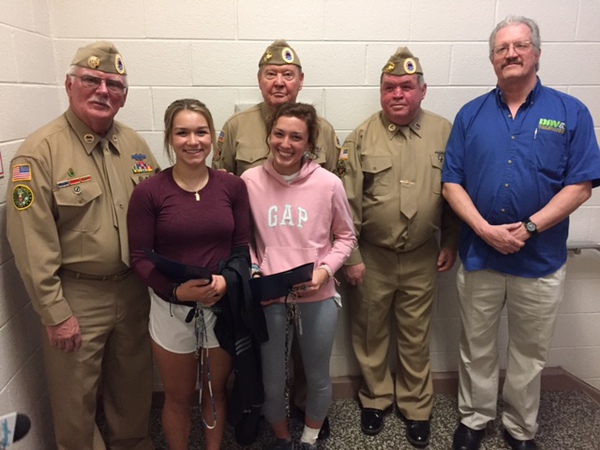 Two Brighton High School students were given awards for their work on behalf of veterans at this week’s Brighton Board of Education meeting.

Officials from AMVETS and the Disabled American Veterans were at the board meeting, in uniform, to honor seniors Bella Van Buren and Kelsey Adams. Van Buren told WHMI that she and Adams - with the help of Board Trustee John Conely - are building a display case to honor veterans from all branches of the armed forces who have attended Brighton High School over the years. Adams and Van Buren were recognized as Shining Stars by the Board of Education, and were honored with a plaque by Honor Guard Veterans, Tim Maher, Dick Young; and Livingston County Veteran of the Year, Charlie Brock

Van Buren and Adams received identical plaques which read: “For your unselfish dedication, for recognizing American veterans, for sharing the cost of freedom.” The plaques were presented to the students because, in the words of AMVETS Post 1775 Commander Tim Maher, “We wanted to do something for them to show our appreciation.” The National Honor Society committee they formed has also sent cards of appreciation to American servicemen and women from the area who are serving overseas. And the students are working with school officials on a way to honor veterans who will be in the audience at high school graduation ceremonies in June.

Van Buren and Adams have collected $500 to help defray expenses incurred in constructing the showcase. When completed, the display case will be placed in a prominent area near the high school cafeteria. (TT)