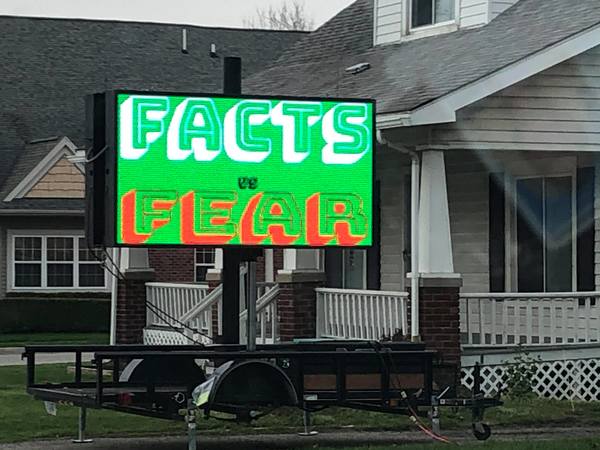 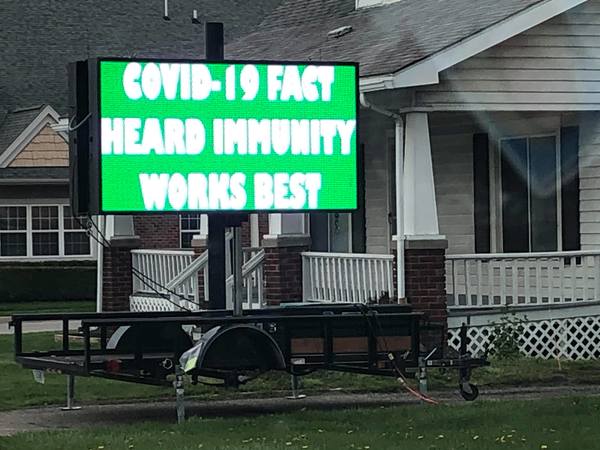 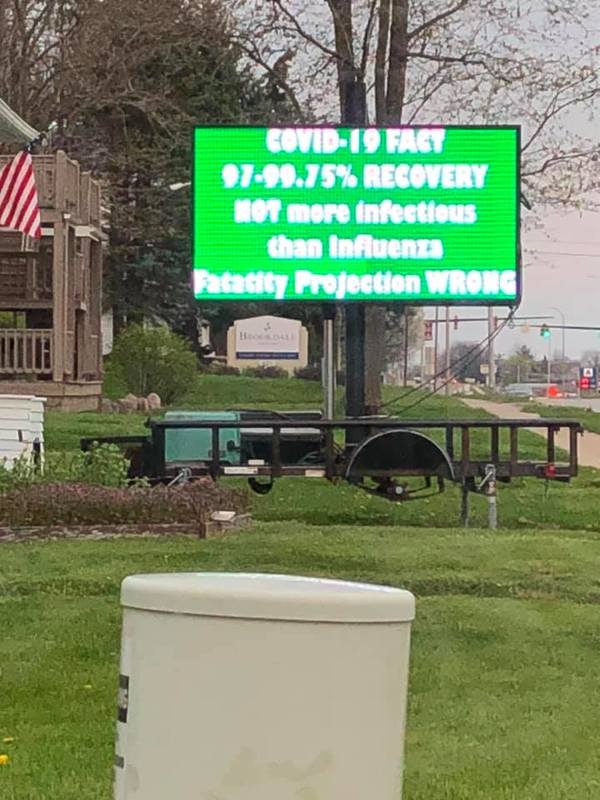 
An electronic sign along Grand River in Brighton is drawing attention for misinformation it contains about the COVID-19 pandemic.

The sign, which sits in front of a home at 807 E. Grand River, has multiple messages that flash in bright green and are very visible to passersby. The property where the sign is located is owned by John Conely, a former member of the Brighton Board of Education and owner of Conely Auto Sales & Service. Conely tells WHMI that the sign is not his, but that of a friend he allowed to put it there. When questioned about the inaccuracies of the statements being made, Conely would only say his friend was a “sharp guy” who served in the Navy and was offering an alternative view of the virus. He had his friend contact WHMI, although the person did not disclose their name, who said he had gleaned the misinformation from a flyer put out by the group Grassroots in Michigan. Originally known as the Lansing MI Tea Party, the group was founded by Joan Fabiano who is a Conservative blogger and grassroots activist.

The lead message is “Facts vs Fear” and that “Heard Immunity is Best”, presumably referring to herd immunity, “an epidemiological concept that describes the state where a population – usually of people – is sufficiently immune to a disease that the infection will not spread within that group.” But because there is no vaccine for COVID-19, herd immunity would not be considered an effective preventative measure. And in fact, one of the links provided by the Grassroots in Michigan flyer leads to a page from the Johns Hopkins Bloomberg School of Public Health webpage in which it is stated that absent a vaccine, herd immunity is only effective when 70% of a population has been infected. If that were to happen, roughly 231 million Americans would need to have been infected by coronavirus for it to have achieved herd immunity (based on a U.S. population of 330,000,000) and with an infection mortality rate of even just 1% (and all available evidence is that the COVID-19 rate is much higher) that means more than 2.2 million would die before herd immunity was achieved. It is also still unclear whether those who have contracted the virus will retain immunity for any period of time.

The sign then proceeds to make other claims that are both misspelled and not factually based. Chief among them is that there is a “97-99.75% recovery” from the disease, therefore concluding incorrectly that COVID-19 is not more infectious than influenza. That has been disproven by a variety of studies that indicate someone with influenza will infect on average 1.28 other people, while those with the novel coronavirus can infect between two and three people on average, a nearly double infection rate.

However, a direct comparison between the two is understood by medical researchers to be inexact at best, as the data on COVID-19 is still being compiled, while that for influenza has been studied for decades. In addition, the testing rate remains low and thus the true extent of coronavirus in the population is far from being determined. The sign then goes on say that for COVID-19, the “fatatity projection is wrong” (presumably referring to the fatality rate). However, it is the conclusion of the vast majority of medical authorities, including the World Health Organization and the Centers for Disease Control, that COVID-19 is both more infectious than influenza and more deadly. The current COVID-19 case fatality rate is thought to be between 6 and 7% worldwide. In Michigan, it is 9% according to statistics compiled by the Michigan Department of Health & Human Services. Again, while those percentages are expected to drop as the true extent of coronavirus is revealed through increased testing, the overall numbers are still expected to produce a relatively high death toll.

In addition, the incubation period for influenza (between 1 and 4 days) is much shorter than that for COVID-19 (between 3 and 14 days) meaning that a person with COVID-19 is more likely to be able to spread the virus before they become ill from it. According to a Harvard study "this strengthens the case for face masks, physical distancing, and contact tracing, all of which can help reduce the risk that someone who is infected but not yet contagious may unknowingly infect others."

In light of WHMI's story, Conely says he has asked his friend to remove the COVID-19 misinformation from the sign.