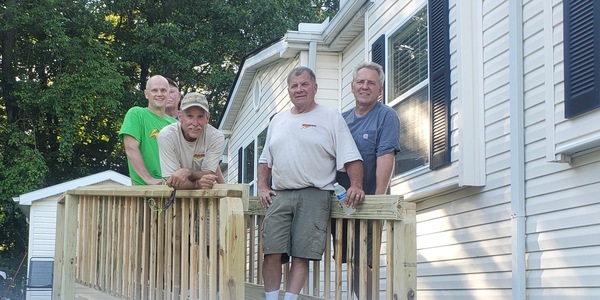 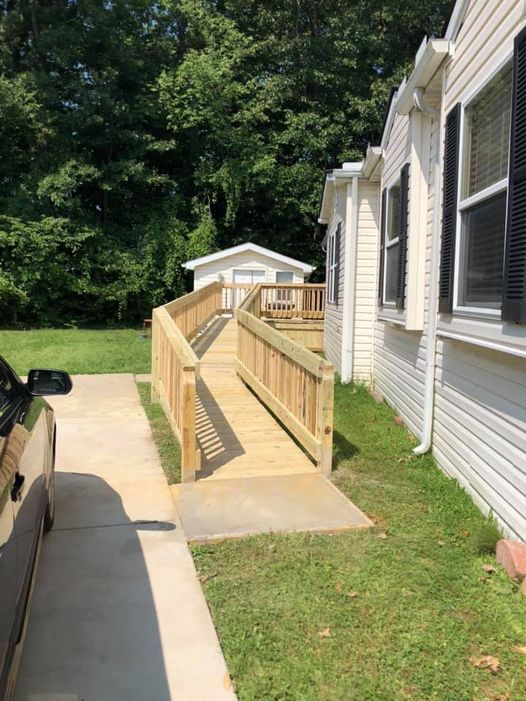 
A local woman now has access to the outside world, thanks to the Brighton Rotary Club.

As a result of the club’s recent project at her house, Michelle Kirkman now has a handicap ramp for her mother. Early on in their history, the group of dedicated volunteers became known as the “Rotary Raiders” for their ambitious work in helping physically-challenged people by erecting the ramps.

Kirkman said, “Those six men, in 90-plus temperatures, they were marvelous!” Kirkman is the daughter of Barbara Carlson, the recipient of the ramp, who lives with her daughter. Earlier, the Rotary volunteers built a ramp for a person who would otherwise not have been able to get to their chemotherapy treatment.

The Rotary Raiders started out slowly - building just one ramp in that first year - but have "ramped up" their efforts since then to the point where they are now averaging 15 ramps a year — not just in the Brighton area but elsewhere in Livingston County and the surrounding counties of Washtenaw, Oakland, and Shiawassee. The volunteers have even gone as far as the Grand Rapids area to install a ramp for a deserving person.

The program is headed by Rotarian Brian Donovan.

The club has been building the ramps “for about 18 years,” according to fellow Rotarian Piet Lindhout, a local architect who designs the ramps and helps assemble them. According to Lindhout, club members have built “over 150 ramps” in those years. Lindhout states the club normally pays for the materials, but says, "Sometimes we get donations” to help cover the cost of the lumber and other materials used. The latest recipient contributed $200 toward the cost of the ramp, which contains $2,500 worth of lumber.

Donovan says that, depending on the project, it normally takes about 4-5 hours to complete, although some projects take longer, depending on weather, the complexity or length of the ramp, and other factors. The group has also built hydraulic ramps for people with walkers.

Jim Gilmore, a former Brighton Rotary president and past District Governor, says when he became a member of the local Rotary, the very first project he got involved in was helping build a handicap ramp. Gilmore said he is “the most unskilled labor on the planet,” but learned a lot from the experience. He said adding a handicap ramp to a home can make a huge difference in a person’s quality of life.

The Brighton club is one of over 33,000 Rotary clubs in over 200 countries and geographical regions worldwide. The mission of Rotary International - the worldwide association of Rotary clubs - is to provide service to others, promote high ethical standards, and advance world understanding, goodwill and peace through its fellowship of business, professional, and community leaders. The club meets Tuesdays at 12:15 p.m. at the Brighton Community Center at 555 Washington St., and guests are welcome to attend.