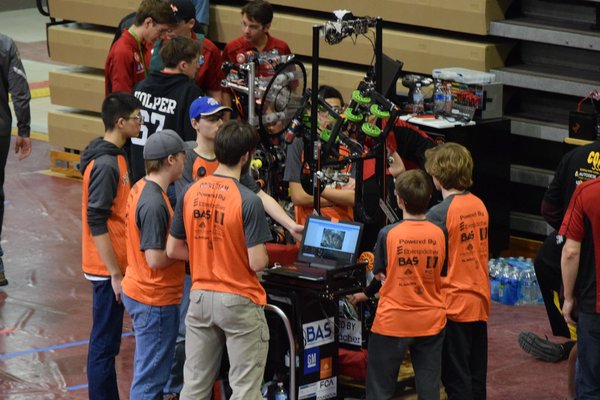 The Brighton High School TechnoDogs FIRST Robotics team is busy fine-tuning its robot for the FIRST World Robotics Championship competition at the Cobo Center and Ford Field in Detroit.

This is the second year that Detroit has hosted the event, and 40,000 students, their families, mentors and tech fans are in the Motor City for the event, including four teams from Livingston County. “ FIRST” is an acronym which means “For Inspiration and Recognition of Science and Technology”. Each year, teams of high school students, coaches, and mentors work during a six-week period to build game-playing robots that weigh up to 125 pounds. The robots complete tasks such as scoring balls into goals, flying discs into goals, inner tubes onto racks, hanging on bars, and balancing robots on balance beams.

Although the teams arrived on Wednesday, the actual competition was to begin today with qualifying rounds, with the tournament slated to conclude on Saturday. Also in the world competition from Livingston County besides the TechnoDogs are the Charyl Stockwell Preparatory Academy GEMS from Brighton, the Hartland High School Electro Eagles and the Howell High School Scots Bots. The GEMS come in as the current state Robotics champions, while Brighton qualified for the world competition earlier in the season by virtue of its accumulated point total. Last year the TechnoDogs finished 4th in the world in the competition. Brighton Area Schools Superintendent Greg Gray tells WHMI that the Brighton High School Robotics program has grown by leaps and bounds since its inception just a few short years ago.

The TechnoDogs team consists of about 20 “core” team members, along with 22 adult mentors representing several industries such as General Motors, Fiat Chrysler, Eberspaecher - which has a large plant in Brighton - and other area corporations. The TechnoDogs team captain is Jake Saxman and the head coach is Nathan Hoagge.

There are actually two FIRST Robotics Championships. The first one, held last week in Houston, Texas, was for teams from the West and Southwest US, along with Asia and Australia. The one at the Cobo Center in Detroit this week features teams from the Eastern US, Canada, Europe, and the Middle East.