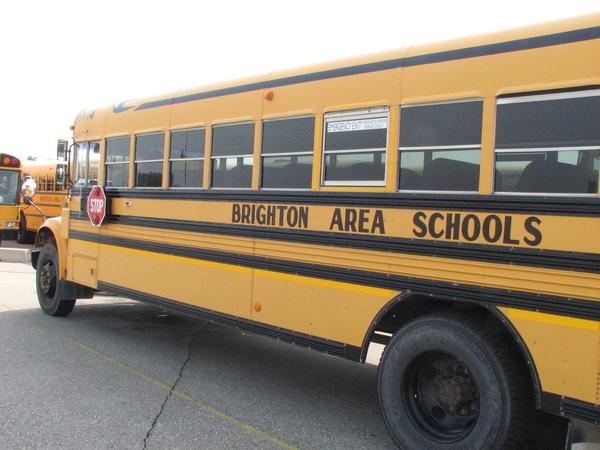 With approval by the Brighton Board of Education, the Brighton Police Dept. will now be able to conduct training exercises with a school bus. The board on Monday voted to approve the donation to the police dept. of a school bus that was no longer needed and scheduled to be auctioned off.

Police Chief Rob Bradford says the bus is in drivable condition and the police dept. will be able to take it to various locations for training. This includes an active shooter training scenario on Oct. 7th at the GM Proving Grounds. All area police depts. in the county will be invited to attend and participate — the sheriff’s office, state police, and city, village and township police depts., along with fire depts. and other emergency First Responders. Brighton School Supt. Greg Gray tells WHMI the Brighton School District is only too happy to be of assistance in helping area police officers undergo such training. The school bus donated to the Brighton Police Dept. is a 2004 Blue Bird with 180,000 miles on it.

The bus is in running condition, but is considered “obsolete”, according to Alice Johnson, director of transportation for the Livingston Educational Service Agency. Although the Brighton Area Schools owns its own fleet of buses, LESA is in charge of transporting students to and from school and hires the bus drivers.

Police Chief Bradford says in addition to training first responders how to handle a school bus accident, the bus will be used for training in cases of an assaultive or unruly person on board or other types of disruptive or threatening situations. Bradford says the training can also be used for emergencies involving other types of buses, from those which transport workers to area manufacturing plants to party buses or Greyhound buses.

Bradford expressed gratitude to the Brighton Area Schools for its donation of the school bus, which — when not in use — will be housed at the Brighton Schools' Transportation Center. (TT)