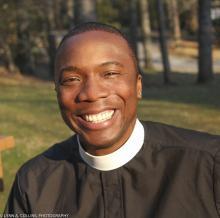 The Episcopal Diocese of Missouri has elected an openly gay man from Livingston County as its next leader.

The Rev. Deon Johnson, rector at St. Paul's Episcopal Church in Brighton, was elected over the weekend to become the new leader of the Episcopal Diocese of Missouri. Containing more than 11,000 parishioners, it covers the eastern half of that state. Johnson, who says he has a passion for "social justice and inclusion", was elected on the first ballot during an election at Christ Church Cathedral in downtown St. Louis that involved 164 voting delegates. He received 71 votes from lay delegates and 42 votes from clergy and will replace Bishop George Wayne Smith as the 11th leader of the diocese in its 180-year history. Preaching from the cathedral Sunday, the Rev. Kathie Adams-Shepherd said the Episcopal Church "has not always been a safe space" for all but that a "new season is ahead."

Johnson, a native of Barbados who immigrated to the United States at age 14, says he has a passion for "social justice and inclusion" which he believes is the main reason for his selection and not his sexuality. He and his husband have two children. He expects to be on the job in Missouri by March 1st. (JK)