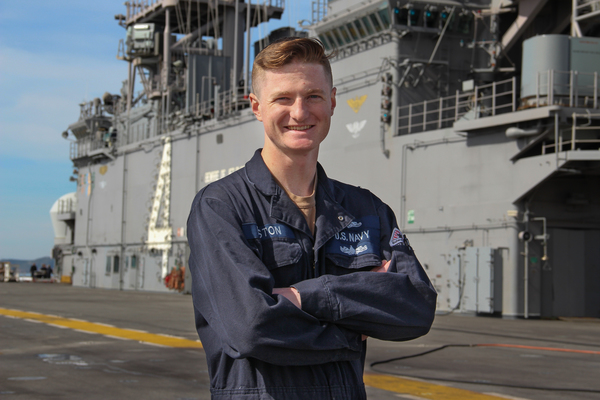 A Brighton native is busy patrolling the seas aboard a naval warship – saying the values required to succeed in the Navy are similar to those found in Brighton.

Seaman Jacob Boston joined the Navy 20 months ago and is currently serving aboard the USS Boxer stationed in San Diego, California. Boston is a Brighton native and 2017 Brighton High School graduate. He’s now working as a cryptologic technician responsible for using electronic signals to protect the ship from missiles and providing a tactical picture that helps the crew understand the operational environment. With more than 90% of all trade traveling by sea, and 95% of the world’s international phone and internet traffic carried through fiber optic cables lying on the ocean floor, Navy officials continue to emphasize that the prosperity and security of the United States is directly linked to a strong and ready Navy.

A press release states the USS Boxer is an amphibious assault ship that has recently returned from a Western Pacific-Indian Ocean-Persian Gulf deployment. It is the sixth ship to carry the name Boxer. It adds there are many opportunities for sailors to earn recognition in their command, community and careers. Boston is most proud of earning his information warfare and surface warfare qualifications – saying it was a big goal for him and required a lot of hard work and studying. More information on Boston’s story can be found through the link. (JM)