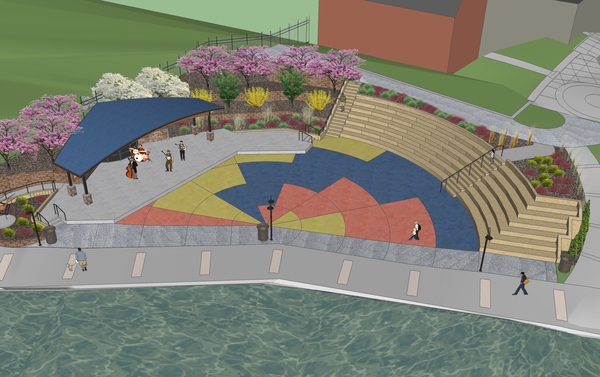 The new amphitheater at the Mill Pond in downtown Brighton now has a name. The Brighton City Council Thursday night unanimously approved the name “The AMP” for the amphitheater, which is situated on the east side of the Mill Pond between it and St.Paul’s Episcopal Church. “The AMP" is an acronym which stands for “The Amphitheater at Mill Pond”.

The amphitheater, which includes a new band shell on the banks of the pond, replaces an old, mostly grass and sod amphitheater. The project is part of a major city effort to replace the old amphitheater with a modern, 21st Century structure for viewing musical concerts and other live events and to replace the old, wooden gazebo with a band shell equipped with an up-to-date electrical system which can easily accommodate all of the amplified instruments used by most of today’s musical groups.

The cost of the amphitheater and band shell project was about $750,000, which is being paid for entirely by the Downtown Development Authority. City Manager Nate Geinzer tells WHMI that council also approved rates for use of the amphitheater by private groups and individuals for such gatherings as family parties and so forth.

The rates will be $150 for use of the amphitheater (which includes the band shell area) by city residents and businesses, $300 for non-city users, and $75 for non-profits. The refundable deposit fee will be $500 for all groups and individuals. All fees will be based on a 4-hour rental. The rates for major downtown Brighton civic events will be discussed at the time council starts the budget process, likely in March. The new fiscal year starts July 1st. (TT)