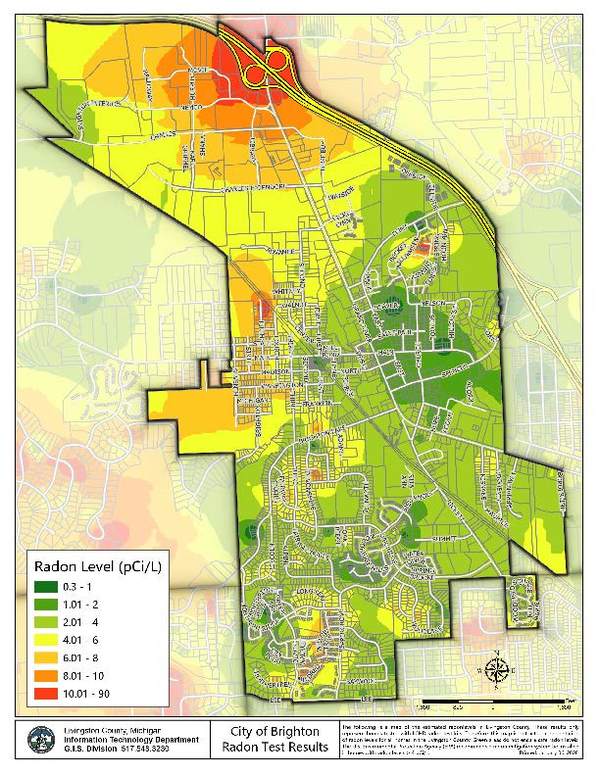 Residents in Brighton will have access soon to radon testing kits.

In a Facebook post on Monday, the City of Brighton published a color map of the city’s radon levels based on past testing. January is National Radon Action Month. Radon is a tasteless, odorless and colorless gas that is the leading cause of lung cancer deaths among nonsmokers in America. It’s estimated to claim the lives of about 21,000 Americans each year.

The map shows the highest levels of radon in the immediate area surrounding the I-96 overpass with Grand River, which registers in excess of 10 picocuries per liter. The other two areas of higher-than-normal concentration include along North Fifth Street and near Williamsen and Flint roads. The Environmental Protection Agency recommends that homes with radon levels of 4 picocuries per liter or more install a mitigation system to prevent accumulation of the gas indoors.

Brighton officials said that exposure to radon is a preventable health risk and testing radon levels in your home can help prevent unnecessary exposure. With that in mind, radon test kits are back in stock and available at City Hall with a limit of one per address upon pickup, while supplies last. You’ll find a PDF of the map below as well as a link for more information.

Heather Blair is the Environmental Sanitarian with the Livingston County Department of Public Health and says the results on all of their radon maps are based on voluntary testing that has been done since 2003, which means the results are only as accurate as the number of tests that have been completed. She added that last year, only 40% of residents who got a radon kit actually returned it for testing. (JK)