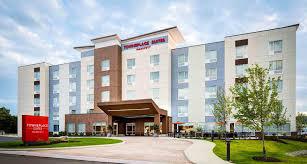 Construction of a third hotel on Challis Road in Brighton is scheduled to get underway soon with approval of the site plan Thursday night. The main motivating factor for all the development is Brighton Health Center South, a 300,000-square-foot medical facility slated to open its doors right after Labor Day.

The latest hotel to gain City Council approval is the 4-story, 84-room Towne Place Suites, with the site plan approved at Thursday night's council session. The hotel had also been approved at a recent Planning Commission meeting, paving the way for council's final OK. The Challis Road corridor is fast becoming Brighton’s unofficial Hotel District. The Hampton Inn at Challis and Library Drive opened its doors last year and a new, 4-story Holiday Inn Suites is under construction farther down Challis. And a fourth hotel - the Candlewood Suites - is under construction just off Challis on Library Drive.

Towne Place Suites, to be located on the northwest corner of Challis Road and Murphy Drive, will share the same property with the new Holiday Inn. The two hotels are being developed by the same company, Stellar Development LLC. Andy Andre, project manager at Stellar Development, tells WHMI Towne Place Suites will have amenities one would expect in a hotel designed for extended stays.

The company also owns the Hampton Inn and the existing Holiday Inn Express at Brighton Towne Square, which will be re-badged for a different hotel chain.

The latest project represents an investment of $5-6 million by the Farmington Hills-based company, which has about 80 hotels in Michigan and Indiana. The property is zoned OR, or Office Research/Limited Manufacturing, which allows the construction of hotels. Although the hotel exceeds the height limit of 45 feet, staff recommended approval since the elements which will go up to 50 feet are merely for branding and architectural touches. Andre expects the new hotel to be completed in the summer of 2019. Picture courtesy of Marriott. (TT)