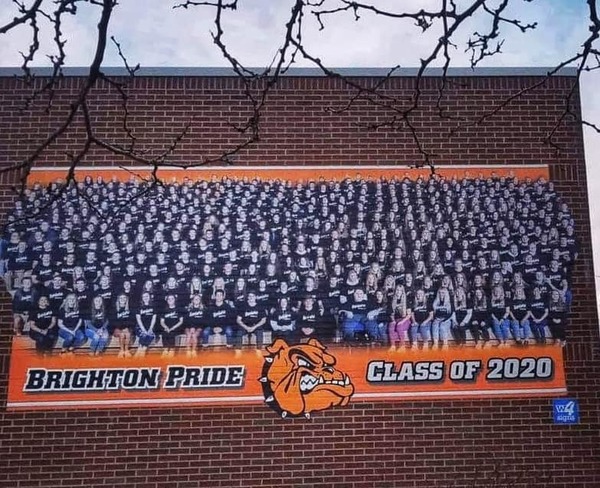 
The 483-member senior class of Brighton High School may not be able to finish their time in the Brighton Area Schools physically in the classroom this year, but they are by no means the forgotten graduating class of 2020.

The class already has gotten some recognition, with more to come. A huge, 15 by 20-foot sign of the entire class is now on full display on the outside wall of The Pound Bar & Grill at the corner of Main and West streets in downtown Brighton. It was the idea of Athletic Director John Thompson. He says that typically, they install a couple blowups of photos of student athletes coinciding with the spring sports season, with the consent of The Pound owner Kevin Montagano.

Thompson says in all of his years in education he’s never seen anything to equal the disruption of the school year like there has been this year with the COVID-19 pandemic and its drastic effect on education, and that made him think of doing something different this year. With the cancellation of classes, Thompson says it was time, in his words, “to show our appreciation of the senior class as a whole.” He says, “ They obviously are having a rough finish to their year, so we wanted to give them (something special).” Thompson adds, “It’s nice for the kids to know heir work is being validated.” Superintendent Greg Gray agrees, saying they are “trying to honor the senior class, and are looking at other ways to honor them, too.”

Thompson says the class photo was taken in the fall. The humongous photo on the east-facing side of the building was ordered from W-4 Signs in Brighton.
Thompson, who has been the athletic director at Brighton since the 2003-04 school year, says he loves his job, even in a difficult year like this one has been. He says he’s “in this business for the enjoyment of working with young people,” while adding that the graduating class of seniors “have worked hard and they’re a great group of kids.”

The Facebook web page “Brighton High School Parents Forum” has been lavish in parents' praise of the group class photo, with one mom saying it had made their child very happy to see the huge photograph, and another thanking the school district and The Pound for putting up the mural, calling it an “amazing, visible reminder to our seniors and this community.”