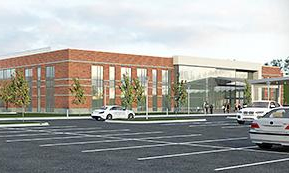 In a recent article titled “What the Hospitals of the Future Look Like”, the prestigious Wall Street Journal extolled the virtues of the new, $175 million, nearly 300,000-square-foot Brighton Health Center South, which is referred to as a "microhospital."

The project is expected to provide about 375 medical staff positions when the center opens right after Labor Day. The article cited the Brighton facility as one of a new breed of medical centers that are establishing a new paradigm for state-of-the-art medical care in these times of skyrocketing health care costs. The facility will have multiple exam and operating rooms, a pharmacy, and specialty services in both pediatric and adult health care, musculoskeletal health, ophthalmology, radiology and diagnostic imaging, plus pathology and comprehensive cancer services including radiation oncology. The only service it will lack is in-patient care, but it will have just about everything else — including a 1-night overnight stay, if deemed necessary.
Brighton city officials predict that Brighton Health Center South will have a positive impact on business in the community, and are looking with great anticipation toward its opening date.

In planning for the new facility, the city and Livingston County will make improvements to Challis Road, particularly at and near the intersection of Karl Greimel Drive where the medical center is rising. City Manager Nate Geinzer says that the project is part of a trend, and places the U of M, and by inference Brighton, in the forefront in the health care industry. Geinzer tells WHMI this is the perfect time for the community to put its best foot forward so that visitors will be exposed to the many attractions Brighton has to offer, such a shopping, dining, recreation, and its eclectic and trendy downtown.

In order to handle the additional traffic, Challis Road will be upgraded, and Geinzer says that project, with the lion’s share taken on by the Livingston County Road Commission, is expected to start in the near future. The estimated $2.3 million project will be 80% funded by the federal government and 20% by the road commission from its FY2018 budget.

The facility is going up at a 32-acre site on the southwest corner of Challis Road and Karl Greimel Drive, and the area between the railroad tracks and Murphy Drive (called Karl Greimel Drive south of Challis) will be completely reconstructed and widened. Road Commission Managing Director Michael Craine says the work will require some long term closures on Challis, likely starting in May, meaning motorists will need to detour onto West Main St./Brighton Road and Bauer Road to make the loop. The project will involve a complete reconstruction — removing the old road surface and sub-surface and constructing a new one, softening hills and curves and making improvements in drainage.

The U-M Health System’s new health center will provide expanded primary and specialty care in the Brighton area. The facility will bring more than 40 University of Michigan specialty services to children and adults, all under one roof. The Health Center is expected to bring over 300 jobs and serve over 250,000 patients a year. The project is about three times the size of UMHS’s most recent building project in Northville. UMHS operates three existing health centers in the Brighton area which will remain open. (TT)