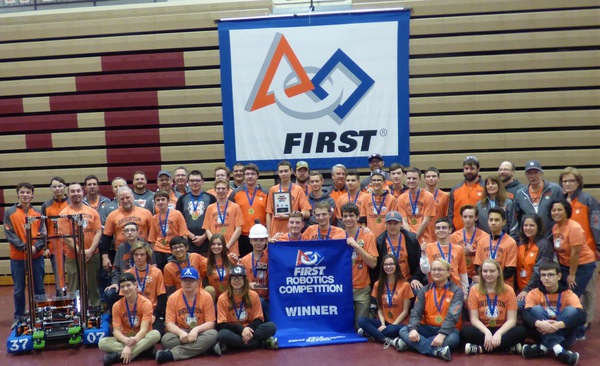 An Alliance made up of the Brighton TechnoDogs, Hartland ElectroEagles and Walled Lake MoreMonsters won the district FIRST Robotics championship at Milford High School on Friday and Saturday.

The three-team alliance beat the competition to qualify for the State FIRST Robotics Tournament to be held at Saginaw Valley State University April 11th through 15th. Co-coach Rocky Roberts, who is the auto lab teacher at Brighton High School, tells WHMI the TechnoDogs and their alliance counterparts did very well in the competition.

The assignment for the Robotics teams, called FIRST Power Up, was for the robot they made to pick up power cubes and place them on a scale. The goal was to place as many power cubes as possible on the scale without any falling off. Roberts says the team, in his words, “went out of their comfort zone this year” and made its robot out of extracted aluminum.

The other Brighton co-coach is Dan DeLisle, who is a department manager at the GM Proving Grounds in Brighton and Milford townships. Roberts says the TechnoDogs currently rank 5th out of 508 robotics teams in the state. Roberts says he will be taking 40 TechnoDog team members and 20 adult mentors to the state tournament next month. (TT)