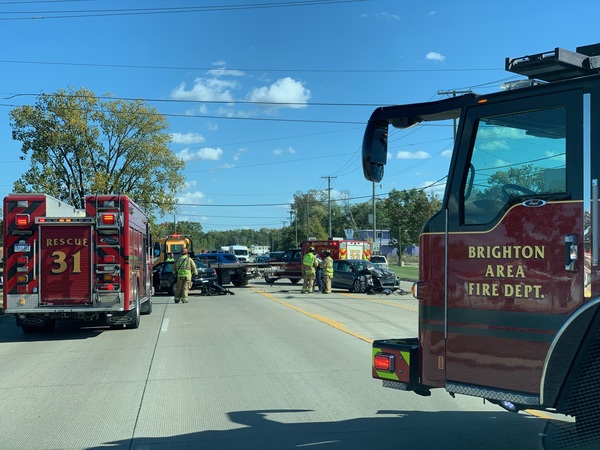 The Brighton Area Fire Authority, EMS and Michigan State Police were dispatched around 2:30pm on an initial report of a minor accident on Grand River near Felske Drive and Hometown Bicycles. Brighton Fire Chief Mike O’Brian says relatively quickly, EMS crews found it was a head-on crash with one person trapped and unconscious at the time and immediately started providing care. He says firefighters extricated the patient and assisted with care.

Both patients were transported to the University of Michigan Medical Center in Ann Arbor. O’Brian described the patients as being a middle-upper age female and a male under 40. Michigan State Police is investigating the crash.

Meanwhile, the cause of vehicle fires that occurred at a Genoa Township business remains under investigation. The incident occurred around 6:45pm on Tuesday at Truck and Trailer Specialties. Crews with the Brighton Area Fire Authority were dispatched to a semi-truck that was on fire at the business off of Grand Oaks Drive. Chief Mike O’Brian tells WHMI while enroute, it was advised that multiple vehicles were on fire. O’Brian says two vehicles were found on fire in a storage yard at the truck facility. He says it upfits and works on larger snow removal equipment, things that are typically owned by municipalities such as the DPW or MDOT. O’Brian said one truck caught on fire, which caught the one next to it on fire and it started affecting a third. He said crews worked quickly and were able to get the fires out.

O’Brian said fire investigators were back Wednesday working through the scene to try and determine a cause or why it happened. That investigation is continuing.