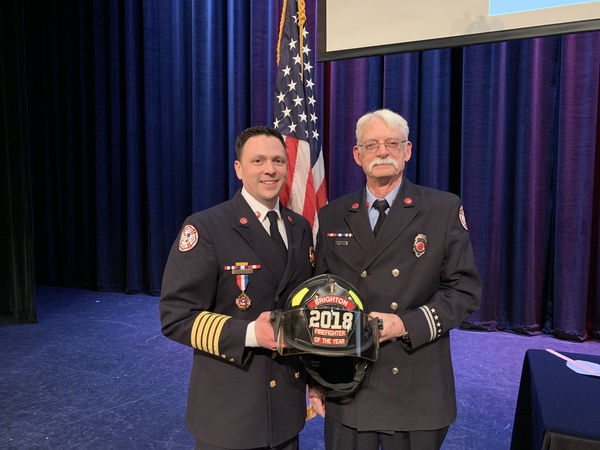 Captain Glen Bailey of the Dorr Road fire station in Genoa Township has been named the Brighton Area Fire Authority Firefighter of the Year for 2018. The annual awards ceremony was held Friday night at the Brighton Center for the Performing Arts. Although the proceedings were interrupted a couple of time by calls - for a structure fire and a medical call - a full complement of firefighters, their spouses and families was present for most of the evening.

Bailey was the full-time fire chief of two fire departments in Indiana - Brownsburg and Plainfield, both suburbs of Indianapolis - before coming to Brighton in 2001. He said that he has loved being a firefighter all these years.

The fire station of which Bailey is in charge - Station 34 on Dorr Road - was also named the Fire Station of the Year. Fire Chief Mike O’Brian tells WHMI that Bailey has been crucial to the overall success of the Brighton Area Fire Dept. Bailey, who was given a standing ovation upon receiving his award, says he will be retiring in April and he and his wife will be moving down South.