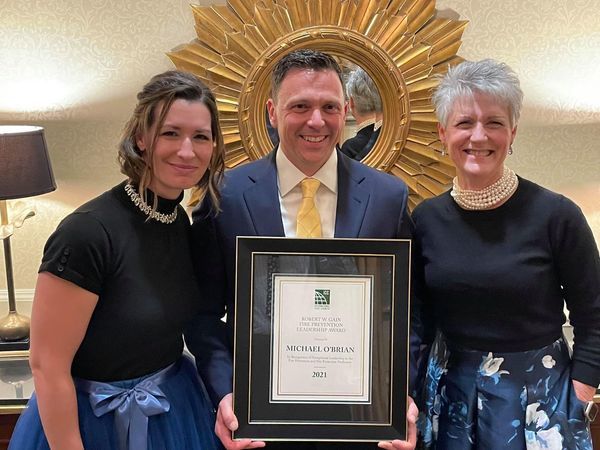 
The highly respected individual who heads the Brighton Area Fire Dept. has been honored by an international firefighter’s organization.

Fire Chief Michael O’Brian has been accorded the prestigious Robert W. Gain Fire Prevention Leadership Award by the International Code Council. The award was presented last Tuesday at the ICC Gala in Pittsburgh during its annual conference.

The Robert W. Gain Fire Prevention Leadership Award “is presented annually to recognize career achievement by an individual who has demonstrated exceptional leadership and longstanding dedication in support of fire codes and fire prevention.” The honor was bestowed to O’Brian in large measure for his efforts in developing better and tougher fire and building codes for the future.

O’Brian said, in his words, "I’m truly honored…It’s humbling to be recognized.” He added that he has, again quoting, “had the ability to work with some amazing people over the years, (leading to) making a difference in making the community safer.” O’Brian said he has “found being engaged at the International level allows (the organization) to truly make a difference around the world.”

O’Brian has been a member of the International Association of Fire Chiefs and their Fire and Life Safety Section for a many years, which he says has aided in his professional development. As a result of his involvement, he is able to bring information on the latest trends and developments in firefighting back to his firefighters and the community.

The chief said it’s important to have open communication with his fire personnel, and to educate them on the work being done on the building and fire codes, “to aid them at the scenes of incidents.”

The Brighton Area Fire Authority has 75 paid, on-call, part-time firefighters and 19 full-time staff, including command officers and office personnel. O’Brian says the department is working on addressing the shortage of firefighters by hiring 10 more.

The authority covers the city of Brighton and Genoa and Brighton townships. Anyone interested in applying for a position with the fire dept. is asked to go to the BAFD website at brightonareafire.com, click on “Join Our Team” and follow the prompts.

The department will stage its annual Open House on Sat., Oct. 9th, from 10 a.m.-3 p.m. at the downtown fire station at 615 West Grand River in Brighton. There will be live fire extinguishing demonstrations, the opportunity to meet firefighters, and Sparky and Freddie the Fire Truck will be on hand. There will also be free hot dogs and cotton candy while the supply lasts.

Pictured from left to right: Angie Wiese, board member with the International Code Council and Fire Safety Manager for the City of St. Paul, Chief Mike O'Brian and Tonya Hoover, Acting US Fire Administrator and former California State Fire Marshal.