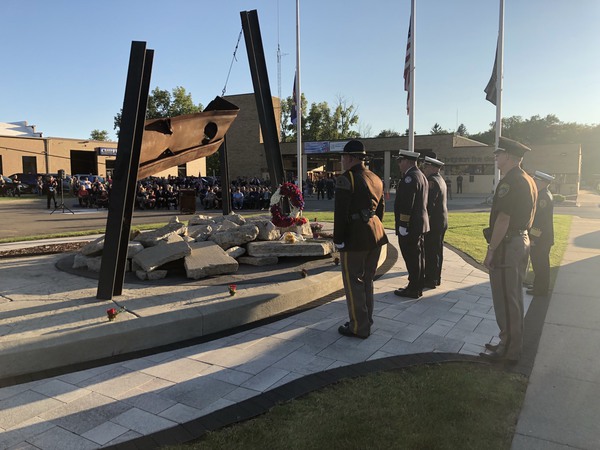 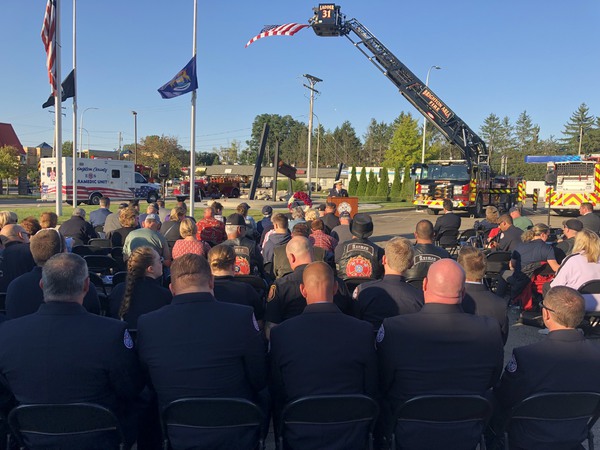 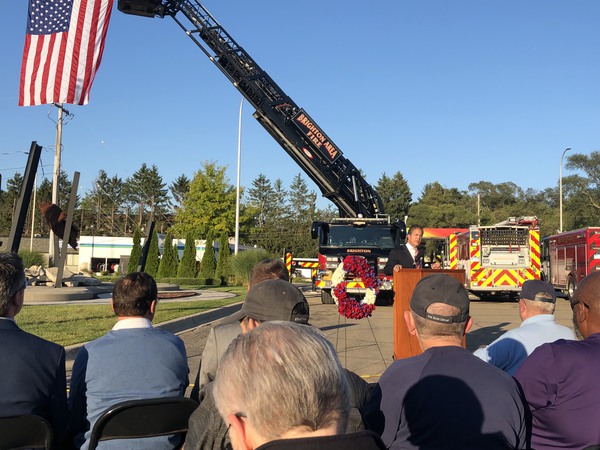 Roughly 300 firefighters and members of the public came out to Brighton to honor the fallen and suffering on the anniversary of the September 11th attacks.

Brighton Area Fire Authority Chief Mike O’Brian called it one of the better turnouts in recent members as roughly 300 firefighters and members of the public filled the parking lot and grass grounds at Station 31 for the event, Tuesday evening. O’Brian led the ceremony, sharing the emotions he and others working in public service felt that fateful morning. He said if you were working as a firefighter, paramedic, police officer, or dispatcher on the day of 9/11, it is so chock full of emotions. The Chief said he felt anger and frustration at all the ugly things that happened that day, but that it also reminds us of all the good that happened, too. He surmised that at some point he and most of his colleagues “probably signed a slip of paper saying they would leave Michigan and go help in New York City. O’Brian said he remembers there being incredible acts of kindness shown from the community.

District 8 Representative Mike Bishop spoke to the crowd on how while this tragedy could have torn the country apart, what it did was the exact opposite. Bishop said, “The worst day in American history can also very arguably be considered the very best day in American history, as all these events played out right before our eyes on television sets across the nation.”

Captain Greg Mobray was the final speaker and gave an impassioned speech that began with respecting the sacrifices emergency workers made on 9/11. He then transitioned to a cautionary tale on the hazardous health effects many firefighters who helped on the scene at Ground Zero still battle. Toxic exposures and carcinogens released into the air at the scene have been linked to 70 kinds of cancer that is still claiming lives. Mobray shared that while 343 firefighters died during the attacks, 180 more have passed from “9/11 illness” since. He said there is a somber reality that that number could pass 343 before the 20th anniversary.

As part of the tribute, a wreath was placed in front of the twisted steel girder from one of the two towers that rests in front of the station. The station bell was also rung 15 times in 3 measured passes of 5 times each. This Tolling of the Bell is a time-honored sign of respect for firefighters who made the ultimate sacrifice.
The ceremony ended with a moment of silence for all who lost their lives as a result of the attacks. (MK)