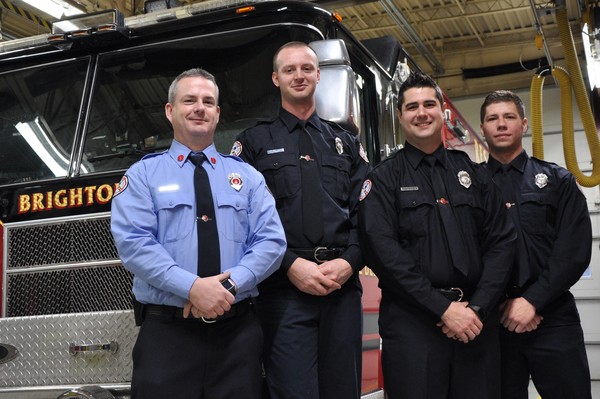 The four all started out as paid on-call firefighters with the Authority and officially start their duties December 29th. They include Corey Laber, who was promoted to lieutenant this year and appointed station lead of Station 34 in Genoa Township. Jeremy Griffen obtained his EMT certification in 2017 and continued in 2018 to achieve engineer status. Phillip Mattern has also achieved engineer status while Justin Thornton completed EMT training this past July. Fire Chief Mike O’Brian said the Authority is proud to have been able to hire within the organization and promote these talented firefighters who will assist the organization in its mission to meet the growing demands of their communities -including the expansion of 24-hour coverage in Genoa Township.

A grant will help fund the new hires. Brighton Fire was awarded the Staffing for Adequate Fire and Emergency Response (SAFER) from FEMA in September 2019. The grant provides federal assistance for a three-year period to support fire departments working to meet the needs of their communities and expand 24-hour coverage. The grant will help cover the salaries and usual benefits of three out of the four new full-time firefighters over the next three years: 75% in years one and two and 35% in the final year, totaling $533,355 in federal assistance. The fourth firefighter hired filled the vacancy created from the retirement of 50-year employee, Captain Don Hall. More information on the four firefighters is available in the attached press release. (JM)