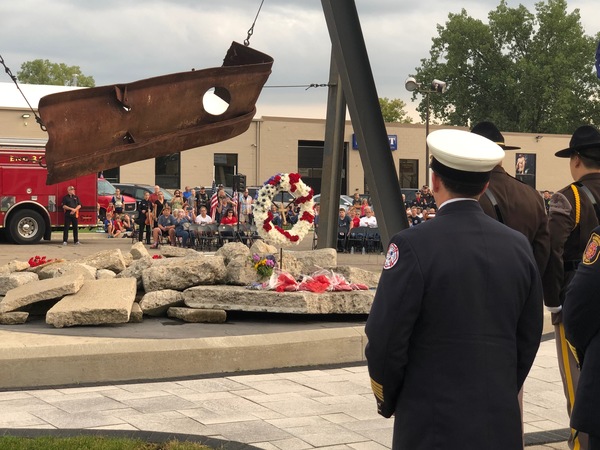 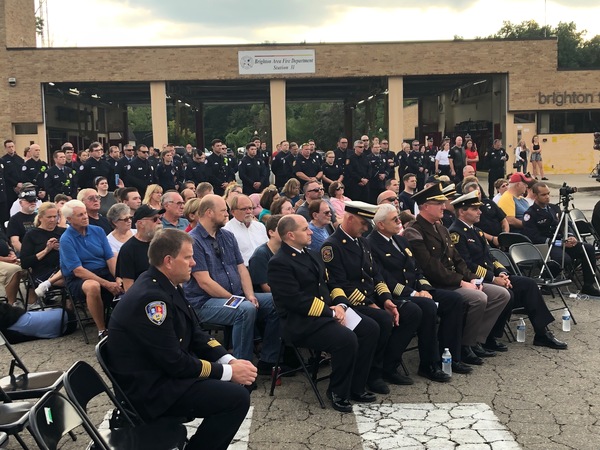 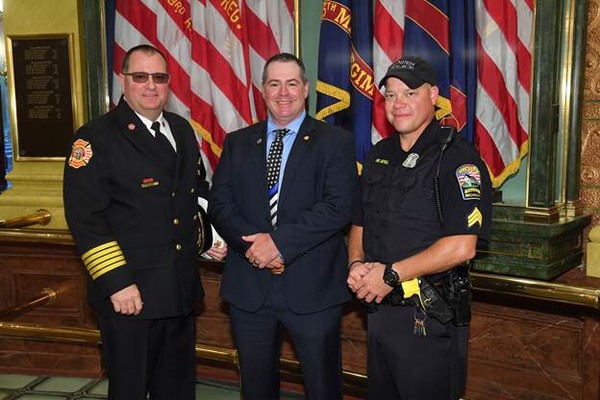 Citizens and first responders from all over came to honor the memory of lost lives and sacrifices made during the Brighton Area Fire Authority’s annual 9-11 Tribute to Our Fallen Heroes.

Brighton Fire Chief Mike O’Brian shared what the day means to firefighters, thanking the community. He said, for them, September 11th is not only a day of remembrance for the heroes and innocent people that were killed, but it is also a day where we start to remember how the United States came together. O’Brian said the theme really is that we “never forget,” and he thanked the Brighton and Livingston County communities for the support they’ve shown through the years.

Representatives from 3 legs of public safety shared their perspectives to the crowd in attendance. Hartland Deerfield Fire Authority Chief Adam Carroll spoke of changes spurred on by the events of 9-11 and how they have unified departments across the country. He said that training in mass casualty incidents is something that came from that day that wasn’t there before.

Livingston County Sheriff Mike Murphy shared his story of having a flight cancelled on 9-11 and the eerie feeling it gave him being near an airport in Vancouver, British Columbia, where many west coast flights were diverted to. And while police officers were seen in high esteem following 9-11, he warned of the dangers caused by the mass scrutiny and quick public judgement of officers in recent years. He said this causes hesitation in officers that can become dangerous.

Ann Arbor Fire Chief Mike Kennedy made remarks on behalf of EMS, saying that despite the bad things that happened that day, good has come from it. He pointed to increased federal resources going into EMS supplies, and the continued efforts to better monitor and help the mental health problems that first responders may encounter because of the difficult nature of their duty.

Following their remarks Captain Andrew Piskorowski introduced the ringing of the bell and recited the firefighter’s prayer. The bell was then tolled 5 times in each of 4 cycles, recognizing the 343 firefighters who lost their lives in the line of duty on September 11th.

Next was the presentation of a wreath at the station’s 9-11 Memorial. Brighton Chief of Training Greg Mowbray gave an impassioned speech, afterwards, lamenting on how the memorial is being disrespected on frequent occasion by visitors using it as a hot spot to play phone games at. He encouraged people to go back to a time of thinking of others, and not just themselves, sharing the story of Captain Patty Brown from Ladder 3 who died in the north tower doing just that, on 9-11.

The hour-long ceremony closed with a stirring violin duet of Amazing Grace, played by Introductory Firefighter Melissa Bechtel and her sister, Julia Jaber. Roughly 300 people and members of at least 7 first responding units and 2 motorcycle clubs were on-hand for the tribute held at Brighton Fire Department Station 31, on Grand River.

Meanwhile, numerous September 11th ceremonies and events took place earlier Wednesday to remember those killed during the 9/11 terrorist attacks. To mark the anniversary, Michigan and U.S. flags within the state Capitol Complex in Lansing and at all state buildings were lowered to half-staff and both the House and Senate held ceremonies at the state capitol.

Republican State Representative Mike Mueller of Linden welcomed two guests - Sgt. Dwayne Jewell from the Linden Police Department and Chief Ryan Volz from the Fenton Township Fire Department. (Bottom picture) Mueller, a former Livingston County Sheriff's deputy, says they lost a lot of police and firemen that day and he has a personal connection to both Jewell and Volz being in law enforcement for 19 years. Mueller said even though he worked in Livingston County, Fenton and Linden border Tyrone Township - which was the township he was assigned to for most of his career.