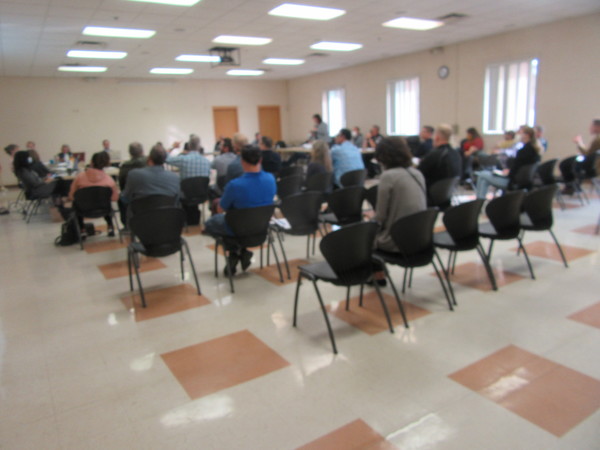 
Almost everyone out of the nearly 30 people who spoke at a packed special meeting of the Brighton City Council Saturday was opposed to the idea of a marijuana dispensary — especially on the city’s Main Street.

Those who spoke said that the downtown is meant to be a gathering place for families — especially for children — and a marijuana dispensary is not in keeping with the “family-friendly” character the city and its residents hope to maintain. The shortage of parking spaces and traffic (including pedestrian) were also concerns expressed by the public at the forum, held at the Brighton Community Center.

Toward the end of the “retreat”, as it was called, Council voted 6-1 to send the feasibility of allowing a marijuana dispensary to the Planning Commission for review and a recommendation within 60 days. However, according to the language in the motion introduced by Council Member Jim Bohn, a dispensary would not be allowed on Main Street, nor anywhere else downtown. Mayor Pro Tem Susan Gardner voted no on the resolution, saying she is opposed to a marijuana dispensary anywhere in Brighton - not merely downtown. Gardner said the city’s motto is, in her words, “where quality is a way of life. I don’t want it to be where marijuana is a way of life,” she told the council.

Mayor Shawn Pipoly tells WHMI the city will look at areas where such facilities could potentially go and other aspects of the issue. That would include allowing up to two dispensing facilities and two testing facilities, but not within 1,000 feet of a school or the Downtown Business District. For his part, Pipoly said the city wants to be able to control the process so that a ballot initiative isn’t brought forth by some party that ends up telling the city what it has to do. As Pipoly put it, “We want control of it.”

Dr. Ed Loniewski, speaking as a private citizen, told the council that other than with a form of glaucoma, there have been no documented positive results from the use of marijuana in double-blind, placebo-controlled clinical studies. He is an orthopedic surgeon and two-time past chairman of the Greater Brighton Area Chamber of Commerce.

On the other hand, some others who addressed the council maintained that marijuana does have medical uses and has helped many people. However, even those in favor of such dispensaries said they don’t belong on Main Street.

The subject of a possible marijuana dispensary in downtown Brighton first came up when Jerry Millen of Hartland Twp. bought the former Rolison PRO Hardware at 111 West Main St. and expressed a desire to convert it into a marijuana dispensary. However, he has not yet approached the city with a formal proposal, saying instead his main desire right now is to restore the building, regardless of what business ends up there.

A couple of years ago council approved a “marijuana moratorium” after the state passed the Michigan Taxation and Regulation of Marijuana Act of 2018. With Saturday’s retreat now history, the Planning Commission has been instructed to get the information it collects back to the council within 60 days with a recommendation and establish guidelines for a possible ordinance. Council also directed city attorneys to explore the creation of a licensing and application process for such a business.