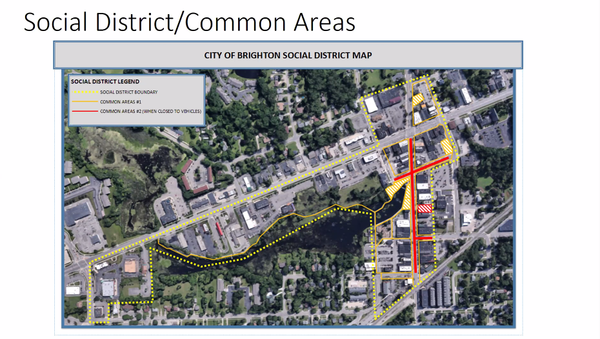 
The City of Brighton isn’t yet ready to commit to allow outdoor drinking in a would-be social district.

At their online meeting Thursday night, Brighton City Council viewed a presentation and held a discussion on their openness to creating a social district encompassing portions of Main Street and Grand River. In the proposed social district, which is allowed to be created under an executive order from the governor, businesses within the designated boundaries could sell alcoholic beverages to patrons, who could then take them outside and enjoy them in designated common areas. A subcommittee has been working on details of what such a district would look like in Brighton, and the regulations that would be applied, with help from the Brighton Police Department. Police Chief Rob Bradford was supportive of the district, as long as it kept posted hours of noon to 10pm. After 10pm, he says Brighton’s demographic changes downtown.

The proposed boundary would include downtown Main Street, and then stretch down Grand River, as far as on the west side as to include Stillwater Grill, The Wooden Spoon, and Single Barrel Social. Participating restaurants could sell one 12oz drink to an individual in a specially designated and marked cup. Patrons would be allowed to take and consume that beverage in common areas that include the area around the Mill Pond, the tridge, and the sidewalk behind the Grand River restaurants. Open alcohol would not be permitted on the Grand River sidewalk though, which led many on Council to believe could be confusing.

Coucilman Jim Bohn also had issues with the district and thought that it might be better reserved for special events that close the downtown area off to vehicles during the summer.

Councilman Jon Emaus was the one most in favor of the district, calling it a lifeline to bars. He said this is a way for people to go out and not worry about social distancing in a crowded bar.

Councilman Jim Muzzin made a motion, which passed, to table it for a period of time but allow staff to continue investigating options.