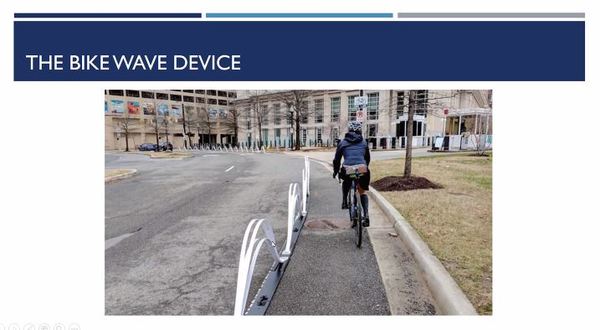 
City of Brighton officials are exploring a new program that would give bicycling enthusiasts lanes of their own throughout town.

Assistant to the City Manager Henry Outlaw told City Council at their latest study session that Brighton has been identified as an ideal candidate by the League of Michigan Bicyclists (LMB) as a participant in the Bike Wave Program. The Bike Wave is a device that stores flat and then can be popped up to 27 inches, creating a barrier for a bike lane. The LMB has received a grant from the AARP for the program, meaning participation in the program won’t cost the city anything except for the labor of installing them.

Mayor Pro-Tem Susan Gardner said she was supportive of this and believes the community will embrace it. She said there is a desire for bikes lanes and rack in the city and that she thinks they are ready for this.

Others on Council were also supportive, with Renee Pettingill asking for more information and feedback from the Chief of police.

Outlaw gave City Council a couple ideas for implementing the program if they choose to participate. He said they could implement the devices in the fall with a minor PR campaign, and then again in spring with a full study of impacts and education campaign for drivers. City Council also discussed which streets could handle the devices. It was felt that Second Street might be good for trial, as well as potentially the Third Street/Alpine/Fairway Trails which used to have a similar lane, but no longer does. City staff will bring this back to City Council with further information.

During public comment, Craig Wood of Brighton Township spoke his support for it. Brighton resident Susan Backhaus, who is a candidate for City Council, was more skeptical of devices, fearing they will be run over by vehicles and will get in the way of leaf pickup.