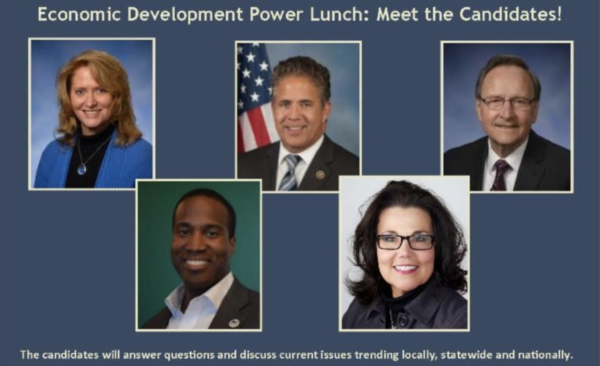 An upcoming luncheon hosted by the Greater Brighton Area Chamber of Commerce is drawing questions after being advertised as a “Meet the Candidates” event, but only featuring Republicans running for various offices.

The Power Luncheon: Meet the Candidates! event is co-hosted by Ann Arbor SPARK and is set to take place Friday, October 5th at the Oak Pointe Country Club. In an e-mailed invitation to chamber members, the gathering is billed as featuring, “a panel of political incumbents” including 8th District Congressman Mike Bishop, State Senate candidate Lana Theis, State House candidate Ann Bollin and State Representative Hank Vaupel. But neither Theis nor Bollin are incumbents. Theis is running against Democrat Adam Dreher for the 22nd State Senate seat and Bollin is taking on Democrat Mona Shand for the 42nd State House seat. In addition, a picture accompanying the invitation featured Republican U.S. Senate candidate John James, who is challenging incumbent Democrat Debbie Stabenow.

When questioned about the discrepancy, Chamber President Pam McConeghy told WHMI the Political Power lunch is something they “do every year with incumbents (and that) whoever is elected in after November will be in our next political power lunch. We are non-partisan, just asking our incumbents to participate. Nothing off the normal.” When asked about Bollin’s participation despite not being an incumbent, McConeghy said she was “only representing as a member of our board” while James would not be present. She offered no explanation as to Theis’ participation, despite not being an incumbent.

Among those left scratching their heads at the inconsistencies was Rebecca Foster, a Pinckney Village Trustee who also serves as Secretary of the Economic Development Council of Livingston County, which works with Ann Arbor SPARK to provide economic development services to businesses in the area. Foster thinks the chamber “should call it what it is, a discussion of economic development with select candidates. Or their preferred candidates, or their endorsed candidates, if that is indeed the case.” But Foster thinks promoting it as a "Meet the Candidates" forum, “when you've only included some of them (and honestly, just the Republicans) - with a side of Joe Hune - is disingenuous at best.”

McConeghy admits that perhaps how they marketed the event could have been done better, but insists the chamber is non-partisan and points to their participation in an election forum October 18th in Hartland that will feature all of the candidates for various local, state and federal races. (JK) Picture courtesy of The Livingston Post