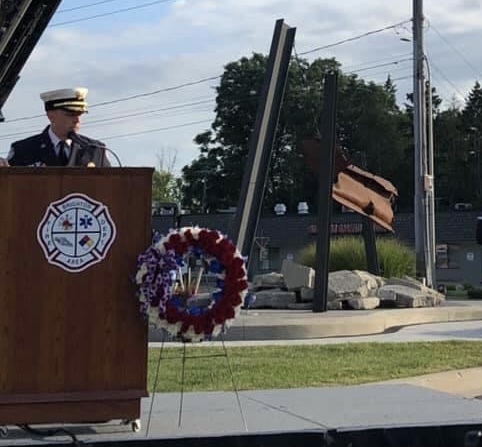 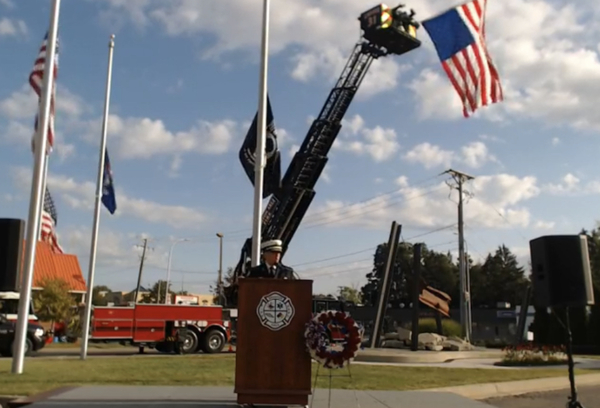 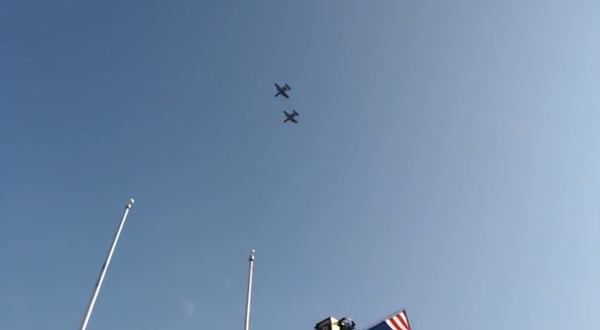 
On the 20th anniversary of the deadly attacks of September 11th, 2001, first responders, public officials and others gathered Saturday morning in Brighton to honor the memory of lost lives and sacrifices made that day.

The ceremony by the Brighton Area Fire Authority was held under skies much like those twenty years before; bright and blue as the sun shone down on those in attendance.

A presentation of the colors was made, followed by a singing of the National Anthem by Andrea Peterson. Brighton Fire Chief Mike O’Brian then made the keynote address, standing in front of the 9/11 monument that sits at Station 31 in Downtown Brighton. Its centerpiece is a steel beam that came from one of the collapsed World Trade Center towers. He began by noting that the similarity to 20 years ago and now went beyond just the weather.

“I think if we remember back to September 10th, the country was in a weird position. Remember we had hanging chads and political infighting with the Bush V. Gore, maybe not too different from where we might be sitting today. When we say September 11th changed everything, it truly did change America that day…20 years ago, 102 minutes changed history…I think those 102 minutes changed so much of us. We use the phrase ‘Never Forget’. We’re lucky. Every day we drive by we see this piece of steel, we see the interaction that the community has with it every single day. So what’s it supposed to remind us about? Is it supposed to remind us that I’m supposed to be a great fire chief? That our firefighters are never going to know what they’re going to? That our law enforcement could be under attack at any point in time? Or does it remind us of September 12th? Think back to September 12th. It was a little different. It wasn’t like today. Local elected leaders, national (and) state leaders came together for what? To protect American people. There was support for public safety like we’d never seen. You reached out. You called your family, you called your neighbors. You paused…So does that piece of steel serve as some kind of reminder to you?”

Chief O’Brian continued with by asking just how we should interpret the events of that day for new generations with no memory of it. “How do we continue to share that message of how important it is? It’s easy to say as the fire service we’re the keeper of this memorial, we’re the keeper of the community, we’re the keeper of that spirit. But how do you teach an 18-year-old what you felt? The anger, the frustration which went through every grief cycle into, ‘What’s next?’ How do we tell them the stories of the firefighters, the civilians, the Dads who came back to work the pile because their sons were trapped? Maybe it’s that heroism that we need to continue to talk about and maybe that’s the stories that we have to tell.”

As they do in all ceremonies marking the sacrifices of those in the fire service, a cycle of four bells was rung out in remembrance of their comrades who passed away during, and from, the effects caused by the September 11th attacks.

Following the presentation, leaders of the first responder community in Livingston County laid a wreath at the station’s 9-11 Memorial and a military flyover.