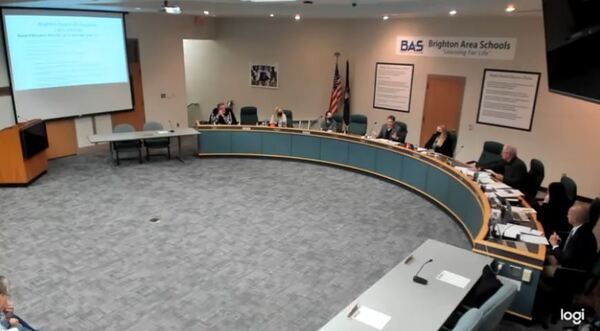 
Masks will continue to be optional throughout Brighton Area Schools as a newly proposed mandate was rejected by the Board of Education.

A special meeting was held last night, as Board members Angela Krebs and Laura Mitchell drafted a resolution that would have essentially mandated masks for students and staff inside district buildings through January 8th at the latest. Board President Roger Myers said that any two members, or the President, can call a special meeting, and added that he wasn’t the one who called this.

More than 50 parents, students, and staff members spoke during a three-hour public comment period, with roughly 4-to-1 being against the resolution. While no explicit threats were made about “coming for” board members as happened at the November 22nd meeting, the crowd did get raucous at several points, requiring Board President Roger Myers to have to warn them they would be removed if they continued to be disruptive.

During the discussion, Vice President Alicia Reid, who presented the motion, said she appreciated the opportunity to bring this forward. She said that, for her, the reason she supports it is because of the dramatic increase in cases, and a Michigan Department of Health and Human Services recommendation for masking indoors. Reid said, “My hope is that a temporary use of masks in an indoor setting for all of our students and staff would help to relieve the pressure on those COVID numbers, bring the positivity rates back down within our community and help to control the spread. That’s what we saw last year, that’s what I would hope we see this year.” She admitted that while it might not work, she still wants to follow the MDHHS’s recommendations.

Reid read the resolution which would direct the Superintendent to immediately implement the November 19th recommendation from the MDHHS until the earliest of the date that they revise the recommendation, the county’s COVID-19 risk level drops to moderate or lower, or January 8, 2022.

Trustee John Conely had several issues with the resolution, including that it was a sweeping order with no exceptions. He was also concerned about the mental health effects that wearing a mask can have. Conely said, “The mental health issues that we’ve all heard of, those are real. We heard from the parents tonight, there, first hand. These are not maybes, they’re not questionable. It was very hard for someone to speak about the issues, and obviously that’s a position—you know, you look at the scale and the teeter totter. There are so many young people that’ll get through this without any problems, but there are a percentage that aren’t going to get through this without problems. They’re having problems. They were having problems before. They’re having more problems now.”

Conely also doubted the legality of such a mandate and said that if this passed, he would resign immediately.

Board Secretary Ken Stahl took a different approach and said he wanted to offer a compromise for both sides. He suggested masking up for two weeks after the holiday break, as a way of giving them a “common baseline.” In exchange, he would also ask for the alternative quarantining measures where only sick children are forced to quarantine.

Krebs, who is also the board's Treasurer, and Mitchell then began to discuss what a compromise might further look like, with initial considerations for a mandate that would just apply to the Tot Spot program through students in 6th grade. However, Krebs felt it was important to start before the holiday break. “The students that want to get vaccinated are not fully protected yet," she said. "This will give the chance for students who choose to be vaccinated- the students, the little ones whose parents choose to get their kids vaccinated, to have that opportunity and be protected. What we’re asking for, is just asking for a safety net for these parents so that they can protect their children the way they need to until the time is available.”

Myers talked about the Board’s obligation to look out for the safety of the children and to do what’s best, saying that there is no perfect answer. He said they have an obligation to promote the safest environment, but what gets lost in the pro-mask argument is the social-emotional impacts that masks carry. Myers said that by issuing strong recommendations and not mandates, the health department is leaving them in the role of playing “armchair epidemiologist,” which they shouldn’t have to be. He pointed to a study performed by the University of Michigan in October and November, in which they collected data from school districts with mask mandates and without. Myers said based on the November 1st analysis, the difference between masking up and not was less than a single student increase in transmission for a school with enrollment of 2,000 like Brighton High School. He concluded his argument against the mandate, asking, “Should we be imposing a mask mandate because its demonstrated that there’s such a benefit in mitigating the spread that it justifies subjecting our children to continued mental health, disruption of the learning environment, social regression, the social emotional impacts? And for me, that answer couldn’t be any clearer than ‘it’s not.’”

Stahl, at this point, said that his mind had been changed following Myers argument. He added that everybody coming to their own conclusion is getting to theirs because they care about the kids. Conely took time to thank parents and staff for their support in mitigation efforts and said they can’t stop trying to get better and find more ways to improve.

Krebs still made a motion to amend, attempting to compromise new quarantining measures in exchange for a mandate for students in the Tot Spot program through 6th grade, running from December 13th until two weeks after holiday break. The amendment failed.

Reid then said she was willing to withdraw the original motion because there clearly was not support for it, thus no need to vote again.