Brighton Board Of Education Recognizes Athletes 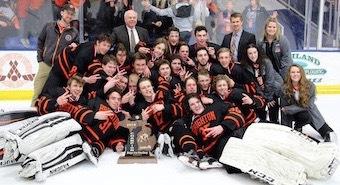 The Brighton Bulldogs chalked up a remarkable winter sports season with a repeat state championship team, two teams that finished 5th in Division I at the state finals, and Brighton teams also captured several conference, district and regional titles.

The 11 winter athletics squads were honored at this week’s Brighton Board of Education meeting. The Brighton Bulldog hockey team led the way with its second state Division I championship in a row. Athletic Director John Thompson tells WHMI that the success of all of the teams makes those who call the Brighton area their home proud to be a Bulldog fan and supporter.

Although the Brighton Unified basketball team is not directly connected with the high school athletic program, it was organized there and plays its home games there, and as a result the Brighton Unified basketball team was honored Monday night for winning the state Unified championship. The Unified program is a national endeavor through Special Olympics.